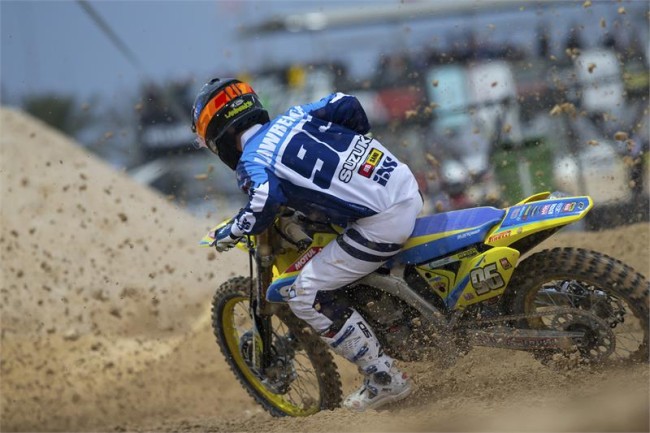 Suzuki World MXGP riders Kevin Strijbos, Jeremy Seewer and Hunter Lawrence are all gearing up for the final race in the calendar, the 2017 Motocross of Nations. Billed as the biggest race of the year, it sees riders representing their countries in teams of three with five results counting from the three races. This year the event is taking place at the Matterley Basin circuit near Winchester, England, bringing back memories from 2006 which is widely recognised as one of the biggest motocross crowds in recent history.

Strijbos was competing at that race 11 years ago, and will be hoping to replicate Belgium’s runners-up position when he was riding alongside Stefan Everts (now his General Manager) and Steve Ramon. “I think the Motocross of Nations is a special race, it’s the biggest race of the year”, said Strijbos. “A lot of people come, a lot of fans make the trip so that is nice for us as a rider. I’m looking forward to racing for Belgium as I’ve pretty much always done well at the Nations and I’m quite happy with how I’ve ridden the last few weeks in the GPs so I’m looking to doing that for Belgium.

“However, my memories of the ‘Nations the last time it was at Matterley Basin in 2006 aren’t great as I had to ride a 250cc and it was difficult and I struggled with the bike. Then I jumped off the track and went into the green-netting that they used as fencing and it all came into my wheel, which ended my race. That was a bad memory but I want to replace them with good memories this year. It is a really nice track, one of the best tracks in Europe I think. As far as how Belgium will do, we still have a decent team, Jeremy van Horebeek is really good, I’m really good and I think Brent van Doninck is good too. He had some problems in the year but with this ride I believe he can focus himself again and do his best and put in the one good moto that we’re looking for.”

While Seewer doesn’t quite have the experience of Strijbos, he has still ridden enough times to know just how important this race is. “The Motocross of Nations is always great to ride, it’s got the biggest crowd of any race and is easily the biggest race of the year. The media attention is always very intense and together with my home GP in Switzerland, it’s one of my most important races. I’m also looking forward to it because I’ll be on an RM-Z450WS and although it’s a big change, it’s the start of the next chapter in my career. For Team Switzerland, I think we had have three good riders. Obviously Valentin Guillod and Arnaud Tonus are coming back from injury but we’ll see. There are many strong teams but I think we can fight for a top-five spot and if everything goes well, and we all have a good day, we can end up on the podium even. I really like Matterley Basin, I’ve seen they’ve done some changes but it looks awesome and if the weather stays dry, I believe we will have some good races.”

For the third Suzuki World rider, it will be a brand-new experience but as with everything that’s happened to Lawrence in 2017, the youngster will take it all in his stride. “Being chosen to race for my country at the Motocross of Nations is pretty exciting. I can’t wait to get out there and get going. The track looks awesome, so I’m pumped on that but we’ll see how team Australia get on. I want to say that Australia is capable of a top five and if we all ride how we can ride and get a bit of luck, I honestly think we can get on the box. I think we are a strong team and I can’t wait to ride in what will be probably be the craziest race of my career so far.”

Despite the differing degrees of experience, all three riders are proud to be lining in their Nations’ colours at a Matterley Basin circuit that is looking pristine in the pre-race photos that have been released so far. Unfortunately, there is once again the threat of rain over the weekend but that shouldn’t put too much of a dampener on what will be the biggest motocross race of 2017.