Suzuki get set for Thailand 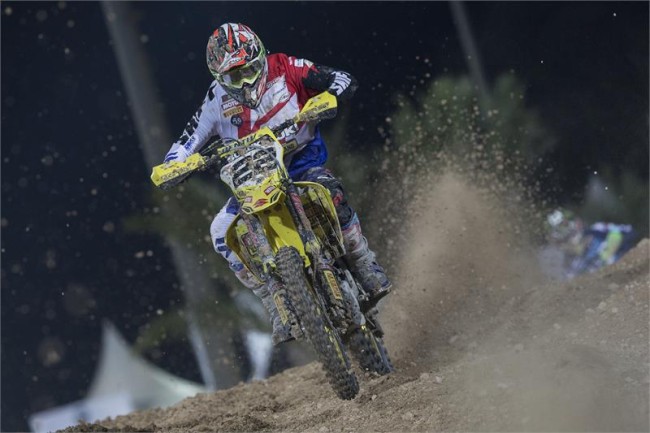 Team Suzuki World MXGP and World MX2 have decamped from Losail, Qatar to Thailand this week where a new circuit in Suphan Buri, north-east of Bangkok, will play host to a humid and hot second round of the 2016 FIM Motocross World Championship this weekend.

With their RM-Z450s Kevin Strijbos and Ben Townley will be looking for more progress in terms of defining optimum race set-ups for the long season ahead.

Little is known about the third venue in three years for the Thai stop on the MXGP trail but temperatures are set to hover around the 40-degree mark meaning that the Asian fixture will again be one of the most demanding. The Grand Prix of Qatar, run under floolights last Saturday night, was a tough introduction to the campaign for the team and both riders, with Strijbos’ eighth position in the first moto the highest classification from the four results. Importantly it was the first step of a lengthy trajectory that takes in another 17 meetings and 34 motos starting this weekend in the Thai ‘sauna’.

“We will have to put our heads together to see what we can do, or what I can do or what I did wrong in Qatar,” said Strijbos after the Losail launcher. “At the moment I don’t know. I expected top-five but I was far off. We will hope for better on Sunday.”

“We will start where we were in moto one,” commented Townley, who was also slightly frustrated by the compromise between set-up and form in Losail but was still 10th overall for a steady comeback to full-time racing. “The track (Suphan Buri) is a bit of an unknown for everyone so that’s a good thing from my perspective. Coming to Qatar I did not appreciate what I was going to face – trackwise – and we had some great off-season riding but it fell apart a little. The fact that I felt horrible most of the meeting wasn’t really reflected in the first moto. I felt pretty decent in that race and want that again.”

Acclimatising to the heat and with the RM-Z450s in freight and set to arrive at Suphan Buri any day, the possibilities for extra riding and testing this week have been minimal but General Manager Stefan Everts knows that Thailand is another mark in the learning process. “We can start again from zero in Thailand,” the Belgian said. “There is not much time to do anything but evaluate Qatar and then start to look more towards Valkenswaard (round three, Holland). We can start to make some proper plans when we get back. We need to do some more homework and get better and stronger.”

In something of a contrast Team Suzuki World MX2 were encouraged by the starts, speed and form of Jeremy Seewer on the RM-Z250 in the MX2 class at Qatar.

The Swiss travelled to opening round suffering with a cold but managed to summon the energy to lead two laps of the first moto and look like a podium contender throughout the Saturday evening programme. He was fourth overall and wants to tackle the Thai heat to banish the memories of the 2015 edition at Nakhonchaisri where he failed to make the finish only metres before the chequered flag due to heat exhaustion. “Last year the only time I was sick the whole season was in Thailand!” he said. “Now I have some illness behind me and I hope to be 100%. I think I can handle the heat. At the U.S. GP last year it was a dry 40 degrees and I was OK. I’m in great shape physically. I think everyone will have to adapt to the temperatures but I am actually looking forward to it.”

Seewer charged after Pauls Jonass in the second moto to try and relegate the Latvian from third place and earn an overall podium finish. His tactic didn’t pay off but the 21 year old looked more than capable of MX2 silverware and the spoils will surely come soon. “Last year it was luck or a surprise to reach the podium but this year the goal is to be there consistently and always be in that top-five,” he said. “That’s what I want to try.”

The fourth Grand Prix of Thailand will start with practice and qualification on Saturday before the two motos per class on Sunday. Local time in Suphan Buri is six hours ahead of CET.