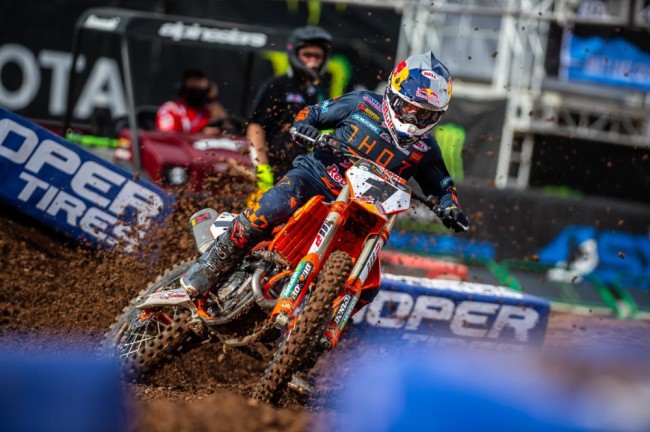 Cooper Webb took the holeshot and, after fending off a charge by Ken Roczen during the first half of the race, Webb cruised to the win after a terrible start cost Eli Tomac any chance of victory.

Tomac started outside the top ten but calmly and methodically worked his way to third passing Baggett with two laps to go giving him a 27 point lead over Webb with three rounds remaining. Roczen meanwhile showed he had the speed to go for the win but tired and ultimately took fifth place and now drops to third in the championship. Zach Osborne had another great ride taking second handing a 1-2 score for the Baker factory!

Webb said: “Every win is awesome and I think I led every lap. Kenny was really riding well at the beginning, I regained focus and was able to ride my laps and got a decent lead. It was cool to be able to enjoy that one a little bit, not so stressful!” 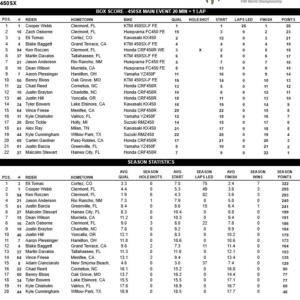 Austin Forkner took the holeshot and the win in a brilliant ride to keep himself in title contention with Dylan Ferrandis for the 250 West title.

Ferrandis got away about fifth but by the time he worked his way into second passing his teammate Cooper and Forkner’s teammate McAdoo ( who took Ferrandis out in the heat race), Forkner had a four second lead. The gap fluctuated slightly but not significantly until the last couple of laps when Ferrandis got the gap down to 2.5 seconds but it wasn’t enough and Forkner took a clutch victory and now sits ten points behind Ferrandis with two rounds to go.

McAdoo rode great all night to take third ahead of a disappointing Justin Cooper who finished fourth. Jett Lawrence got the edge on Hunter but both Aussie brothers crashed and finished outside the top ten, with Christian Craig the top Geico Honda in eighth.

Forkner said: “Robbie Reynard has been working us hard and I think it shows, this was probably one of the toughest races of the season (heat and altitude). It’s good to start to the three races like this.” 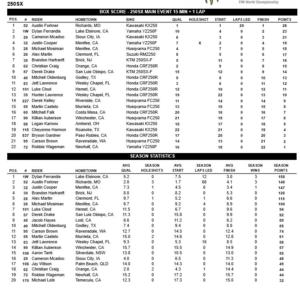