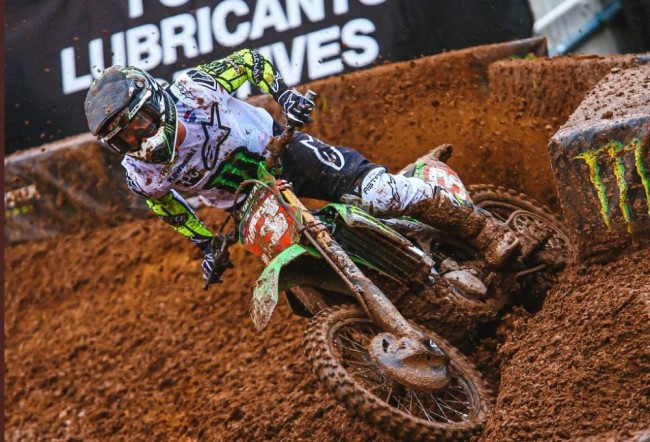 What a race in the mud!

Zach Osborne took the holeshot but Cooper Webb found his way quickly into the lead and Tomac made his move quickly into second as Webb and Tomac checked out on the field. Tomac kept the pressure on Webb and eventually made the move in the whoops to take over first position. Tomac then pulled out nearly a three second lead but the backmarkers came into play and Webb closed right back in and made the move back for the lead as they lapped Ken Roczen who was sixth!

Tomac didn’t give in, stalked Webb and then made the pass back with two minutes to go! But Webb still wasn’t done and made a big late race push, taking advantage of the backmarkers to bring it right to the last lap but Tomac just held on as they lapped tenth placed Roczen for the second time and even lapped Zach Osborne in fourth! Tomac now joins Dungey on the all-time win list with 34 wins and, barring a disaster, looks set to be the 2020 supercross champion in what was a hugely impressive win.

Tomac who is now 26 points ahead of Roczen and 32 ahead of Webb said: “When I got passed halfway I did not want to let this thing go! Lappers were unbelievable, that was a great battle, really fun though.” 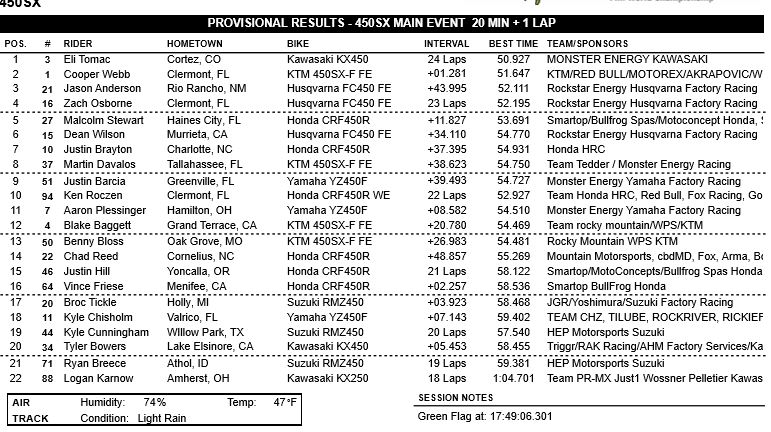 Chase Sexton holeshot the 250 main only for McElrath to go for the jugular and block pass his title rival in turn two forcing Sexton off the track! Sexton crashed a few turns later but as McElrath pulled away and Sexton worked back into the top ten, the red flag came out after Garrett Marchbanks went down hard and needed medical assistance. It meant a re-start and McElrath’s advantage wiped out – it was all to play for again as the rain started falling heavily.

In the re-start McElrath holeshot with Sexton on his tail but five minutes in McElrath went down after colliding with a backmarker and handed the lead to Sexton. From there Sexton took an easy win to go 3 points clear in the championship with McElrath a subdued second after the crash.

Sexton said: “Shane has been on a roll and I have been making a lot of mistakes. I got a gift with that red flag, I was being too impatient. When I saw the red flag, I was like, I’ve got to win this (restart). I’m happy to be headed into this little break we have got with the red plate.” 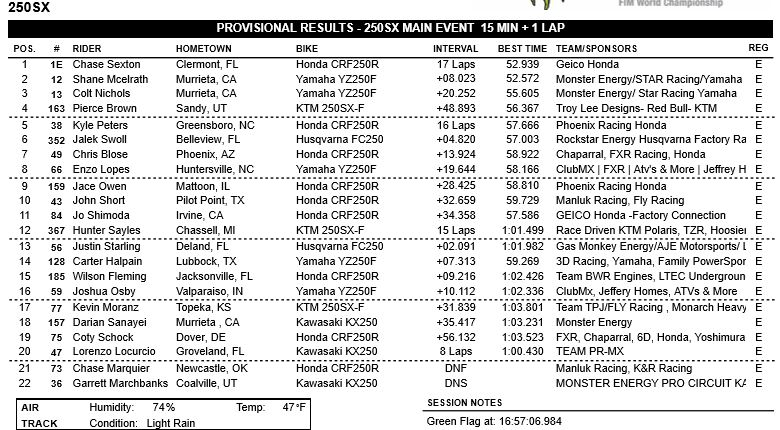