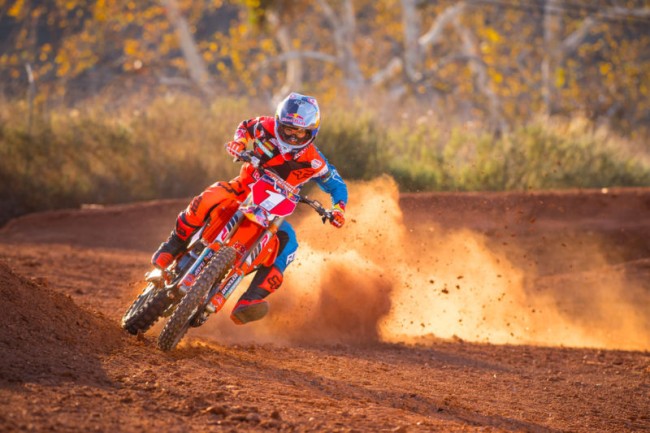 Americans generally aren’t known for their humility but America’s best in supercross, Ryan Dungey and Eli Tomac, defy the stereotype despite having every reason to proclaim their brilliance.

Defending champ Ryan Dungey now has three supercross titles but has remained as grounded and humble as any champion in history, he does the work and lets his results speak for themselves. Dungey managed to lift his game under Aldon Baker last season, delivering more sprint speed and aggression but maintaining his ruthless consistency. It was a combination no-one could match let alone beat and Dungey will be looking to do exactly the same this season and put the pressure on his rivals.

He doesn’t yell from the rooftops but Dungey’s determination to succeed, his dedication to the sport and his ability to be there week-in, week-out year after year aligned with a quiet confidence has to be admired and respected. He will be there or thereabouts all season, but can he stop the younger generation in 2017?

Eli Tomac is still trying to fill Ryan Villopoto’s shoes at Kawasaki but he has shown flashes of phenomenal speed in supercross and more recently at the last two MXGP rounds of the year and the Monster Cup. It appears that Tomac has found some extra comfort on the Kawasaki and with no injuries this off-season, he looks like he is finally set to really challenge for the title. Tomac’s starts are inconsistent and even if he does get the start his decisions in the first couple of turns have cost him places if he can improve his starts and first lap decisions, Tomac could really push the pace to a new level but with the 20 minute plus one lap format this could also help Tomac overcome those poor starts too.

Tomac is ready to win in 2017. Pic: Youthstream

Eli has always had fitness, and you can tell by his riding just how determined he is to win. He is almost like a modern day Jeff Stanton on the bike, but like Dungey, Tomac is quietly confident and shows respect to his competitors. Tomac along with Herlings is one of the very few riders who can take down an in-form Ken Roczen on pure speed and when Roczen crashed at the MEC with Tomac on his tail, Tomac’s mechanic said, “see what happens when you put pressure on him?” Tomac smiled and nodded agreement, the mind games have started and Tomac knows he can be the Kryptonite to stop Roczen’s super powers, like Dungey he won’t proclaim to be the main man publicly but he knows he can win and this year he is ready to prove it.

Then we have Ken Roczen, the German is the cockiest of the three riders, publicly stating he is better than Ryan Dungey and that he wanted to, “scare them” at the MEC in October, saying he believes he is the best rider out there. Roczen is cut from the same cloth as Jeremy McGrath, he likes the fame and attention, he knows he’s awesome and he isn’t afraid to say it. Those comments will have motivated Dungey all off-season, and Tomac will be doing extra reps and extra laps to prove the German wrong.

Roczen might just have the most self-confidence of any rider out there, yes Roczen is a nice guy, he is friendly and out-going, but he has incredible self-confidence to the point of arrogance and quite frankly that level of confidence makes Roczen very resilient to set-backs, no matter what happens, even when he loses, Roczen believes he is still the best rider on the line. And quite frankly he probably is when it comes to natural talent on the bike in this year’s supercross field.

Roczen’s biggest problem might be overconfidence, it cost him a potential title in 2015 when he cased a triple thinking he could do it from the inside, and it cost him one million dollars at the MEC in October as he slightly mistimed a rhythm section, but if he gets the confidence balance right and keeps his focus, Roczen should be the man to beat this year on a the Honda that he clearly loves and seems ideal for supercross racing with it’s lightweight manoeuvrability aligned with an amazing natural talent on a dirt bike. Ryan Dungey might be the defending champion but it seems Ken Roczen is the favourite for the 2017 title.

Then we have the rookie, Cooper Webb, Cooper has the cockiness and chip on his shoulder similar to Ryan Villopoto, meaning he won’t be intimidated by racing the biggest names in the sport. He isn’t coming into this season wanting to be top five, his team manager Keith McCarty stated in a recent interview in Racer X that Webb believes he can win this year.

There is no doubt Webb sees himself on the level of Roczen, Tomac, and Dungey, just look how he went bar to bar with Febvre and Herlings in recent years, but can he keep away from the rookie mistakes to stay in contention? Webb rides smarter than a lot of young Americans, he has the old school elbows up, looking ahead style from the McGrath & Emig era, but he still has the modern day aggression of a Ryan Villopoto and Eli Tomac to push the envelope when required. As we saw in the 250 class it can be a devastating combination when it all comes together, Webb is the next guy after Tomac to be America’s next superstar, he is that good but can he put it all together in his first season? Only Webb thinks he can and that might work to his advantage!

Webb’s teammate Chad Reed is also known for his self-confidence, like Webb Reed rides best with a chip on his shoulder and despite his age Reed genuinely believes he can win this title at 34 years old. Reed will go down as one of the legends, with two supercross titles, and taking on and beating some of the greatest riders in history. But does Reed have the intensity to race with the youngsters week-in, week-out? His relationship with Webb will be interesting, their impending rivalry could spur each other on, but both will be fighting to be the alpha male within the team despite being at the opposite end of their careers. It promises to be a fascinating battle for superemacy at Yamaha between too fantastic riders.

KTM’s Marvin Musquin has the opposite problem to Ken Roczen, Musquin sometimes just doesn’t believe in himself enough, one of the nicest guys in the pits, Musquin needs results before he gets the confidence to win races, but their is no doubt he has the skills to get the job done and challenge for the title. His precise technique could help him in the final laps of the longer motos as the tracks get broken down and if Musquin, who has been on-fire this off-season, can get good results early to get his confidence up, he could well challenge for the title provided he really believes he is good enough to win it.

When you add in the aggression and raw speed of last year’s A1 winner Jason Anderson, the smooth Cole Seely, the even smoother Christophe Pourcel, , natural talent of Trey Canard, the aggression of Justin Barcia, talent of Davi Millsaps consistent performers like Broc Tickle, Justin Bogle, Blake Baggett and Justin Brayton plus Dean Wilson and Malcolm Stewart unbelievably racing as privateers, the 2017 supercross season promises to be melting pot of talent, speed, and unpredictability!

Will the humility of Dungey, Tomac or Musquin prevail or will the cockiness of Roczen, Webb, Anderson or even Chad Reed prevail? We won’t know the answer until May as we ride the supercross rollercoaster for the next five months! 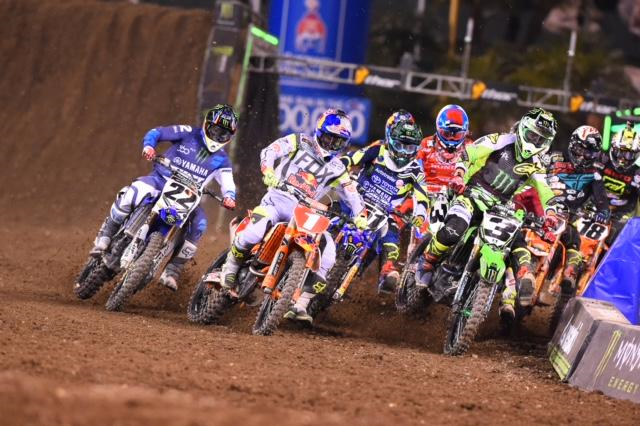 Tomac and Dungey battle for the holeshot. Pic: Cudby