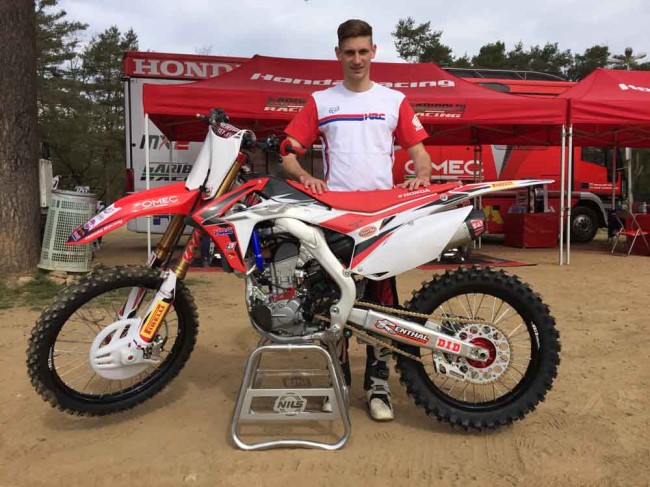 The FIM Motocross World Championship starts its European leg this weekend in Trentino, Italy, after a trio of overseas Grands Prix, and the Honda Gariboldi Racing team are tackling their home race at full strength with two riders.

After Jorge Zaragoza fractured a vertebra at the start of the season, Tim Gajser rode the team’s lone CRF250RW for the opening three rounds. So far the Slovenian contender has chalked up a third place in race one in Thailand, and fourth in race two in Argentina, just shy of a podium. In Trentino in 2014, Gajser finished third in race one, so the youngster will be hoping to add more podiums to his ever-growing tally.

Zaragoza had hoped to make his return in Italy at the start of the ‘European season’, but continues his convalesce so is now targeting his home race of Spain on 10 May.

Therefore this weekend Sullivan Jaulin will make his World Championship Grand Prix debut alongside Gajser. The young Frenchman competed in the EMX250 championship last year and took race wins in Spain, Great Britain and Italy, and took a further two second place finishes. With a win and a second, he also took the overall victory in Spain, his first race of the season.

Furthermore, he was 2nd in the European Championship EMX125 class in 2011, just behind MX2 World Champion Jordi Tixier.

The weekend features a packed schedule with the Honda 150 European Championship running alongside EMX250 and EMX125. MX2 race one gets underway at 1315hrs local time on Sunday 19 April.

“I’m excited about this weekend for a number of reasons: it’s our home race, it’s always a special atmosphere racing in Italy, and we’re back to two riders again with Sullivan and Tim. We’ve been watching Sullivan and have been impressed with his riding, and I’ve every confidence he will perform well on the CRF. As a team we focus on bringing up young talent, like Tim and Jorge, so I’m proud that we can give Sullivan his debut on the world stage. Of course, we are also continuing to support Jorge in his recovery. We took the decision that he should not risk returning too soon, before he is healed, so he is targeting being fully fit for Talavera.”

“It was a really tough first three races, with the heat in Thailand and not riding well in Argentina. I wasn’t happy with myself there, but now we want more back in Europe. I really like the track and I’m really looking forward to it. There will be many fans from Slovenia as it’s the closest track so it will be great for me. Testing has been positive and we’ve made some difference and steps forward, so I’m really happy and feeling ready.”

“I am really happy to be riding this weekend for Gariboldi. I feel really happy and comfortable – the bike is really good and testing has been good this week. With more riding I feel more and more comfortable. In the team every guy is working for you to make the bike perfect so I hope that I can make a good result.

“I’ve never been to the track so this is the first time for me. I’ve been watching it on the TV so I know it’s pretty hard, but I don’t know what to expect. The level in GP is very high so I must relax and enjoy and just do my best. I don’t want to expect too much so not put too much pressure on myself. I was injured over Winter so I missed a little bit of training – it’s only one and half months that I’ve been riding again so I’m not at my top possibility but I feel good and I’m very thankful to the team and Honda for this.”