Stynes switches to Honda for 2018 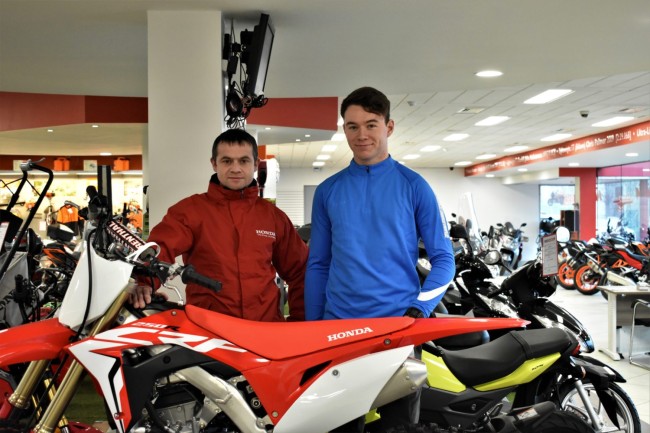 PR- For 2018 Dylan Stynes will be on board a Honda CRF 250 running in the Irish championship and mx nationals and select British rounds.

Dylan had a strong season last year on the TM 250fi and will be aiming for podium finishes in the coming season.

Gavin (CCMRACING.COM)
“its great to be working with Dylan and his family again for 2018. We have him riding a bike that he has never been on but we know the new 2018 Honda CRF250R is going to be great and that he will be up the sharp end of whatever championship’s he competes in. This year like last we are working with other stores and local supporters to get the guys from here racing in the UK and I think that’s what its all about. We all dig in and do what we can and once the guys give us 100% that’s all we ask. It’s something we hope to grow and be able to support more riders so if anyone would like to support us we are always grateful. ”

Dylan:
“I’m super excited. For 2018 I will be riding for CCM Racing again but this time on the brand new Honda CRF250R with direct support from Honda Ireland which I’m really happy about. This season I’ll be competing in the Irish Championship and the MX Nationals in the UK. I have ridden the bike once and straight away feel super comfortable on it. Huge thank you to Gavin and Nickie Craigie of CCM Racing and Honda Ireland for sorting this out. Last year I had a good season so I’m coming into this season feeling strong and ready to do battle. Just a huge thank you to everyone who is on board and helping me out this year – all the crew at CCM Racing, Honda Ireland, TMC MOTOX, CCR, Metcon, Swords Motor Factors, Balbriggan service centre, Risk Racing Europe, Electraction, Vrooam, RaceFX, Fly, Bell helmets, Gaerne, POD, Spence Racing, ReTink Graphics, SEC Academy, A96 Filming”