Stuart Edmonds IN for the British GP! 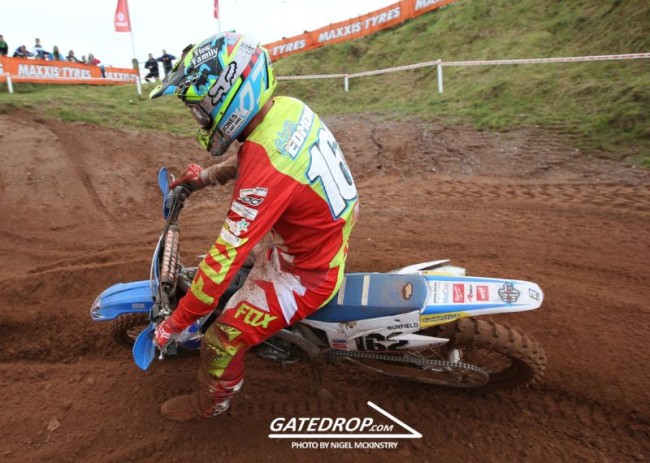 Chad Reed isn’t the only fast wildcard entry for the British GP as Irish rider, Stuart Edmonds will be behind the gate this weekend – watch out Chad!  Stuart competed at the German GP and Assen GP during the 2015 season on-board his KMP Repsol Honda. Stuart managed to score points in Assen finishing in nineteenth place so he knows what it takes to score points at the highest level.

Stuart also had an ankle injury last year that was holding him back but he has worked hard during the winter and hopefully he can put in two good rides this weekend that will allow him to score more MXGP World Championship points.

Stuart comes into the GP with good form after finishing in ninth overall at Desertmartin that hosted the fourth round of the British Championship. Stuart did suffer from a few crashes so ninth overall was a great results all things considered. He is a little bashed and bruised from the falls but hopefully that won’t hold him back this weekend!

Stuart hopes that the British GP won’t be the only World Championship that he competes in this year. Earlier in the season he got the opportunity to ride a two-stroke race at Glen Helen. Ralf from TM USA has invited him to compete at Glen Helen MXGP. It will depend on the funds so nothing is 100% confirmed yet but it would be cool to see him line up at the American GP later in the year..

Stuart Edmonds: “Im a little bashed and bruised from the weekend at Desertmartin with my spills but feeling confidant for the GP this weekend. I have a great team behind me and I’m happy with my bike. I just need to get myself some good laps in for qualifying and I know if I pull a good start and stay on I can get a tow of the GP lads. I know the speed O am capable of. I am conditioned better this year and my fitness has improved so much more than the past few years and I’m still learning each year regarding training, so i know the package that i have and my gruelling winter training that I put in has the strength and lung power to keep up with them, i just need that start and to keep focused and what I see in my head will become reality. My goal is to obviously score points and I have done so last year at Assen which was a pretty gnarly track so I’m going to push my goal forward to top 15, its something that will be very very hard because their speed this year is outstanding but i am always looking to better myself and if I aim for a goal that i have already achieve that means I’m not pushing myself so i think 15th is a big step forward but its something for me to chase.