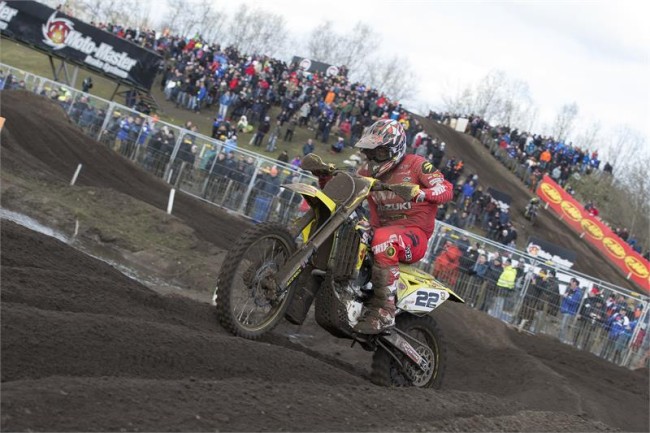 Round three of 18 in the series landed in Europe for the first time, and over Easter weekend, before again heading overseas and to Argentina and Mexico in April.

The Eurocircuit welcomed a 23,000 crowd but the public and paddock had to cope with harsh winter weather with strong winds and heavy showers that soaked the terrain prior to the GP motos.

The Belgian had been close to his first Pole Position of the season on Sunday and led the majority of the Qualification Heat until a small crash and the effects of arm-pump dropped him back to seventh. Undeterred by the near-miss, he displayed the same determination during the first moto today. Although he lost a lot of time and many positions on the first lap due to a small problem with his goggles, Strijbos started an impressive trawl back through the field and hit almost every mark on a swampy and slow layout that rewarded technical precision. Setting decent lap-times and being concise with his passes, he won two places on the last two circulations to finish sixth.

In the second moto #‘22’ was hampered by a poor start and couldn’t quite get the same rhythm on a terrain that was drier and faster. He trailed Evgeny Bobryshev for most of the 30-minute and two-lap distance and was suitably aggressive in the closing stages to overtake the Russian as well as Glenn Coldenhoff to earn fifth place. Both moto scores and the final ranking represented his best of 2016 so far.

Valkenswaard was a difficult weekend for Ben Townley. The former World Champion came to Holland and made the short trip across the border from the team’s workshop in Lommel suffering the after-effects of a virus that left him drained and lethargic. The New Zealander could barely throw a leg over his bike on Sunday and persevered to a creditable 14th in the first moto. After consulting the team during the short break, ‘BT’ attempted the second race but pulled off the track at mid-distance without the strength to continue.

“We have been testing a lot these last weeks and we made some improvements on the bike and we could see the progress already yesterday,” said General Manager Stefan Everts. “Kevin complained about arm-pump yesterday but made a fantastic first moto today. He had a bit of bad luck with his tear-offs but what he showed afterwards was really good. He again proved that he is a very talented kid and can really ride a bike when he wants to. He struggled more in the second moto and unfortunately we just missed the podium. I was quite confident after yesterday so it is a disappointment for me that we missed out. For Ben I am happy that he got out of here in one piece. He was so sick all week and I didn’t think he could race. What he did in that first moto with 14th place, I’m really happy, and also pleased that he was smart and pulled-out of that second moto if he didn’t have the feeling. His health is more important and it was just bad luck to be so sick. Everyone worked so hard so I want to thank them for that.”

Strijbos and Townley now hold eighth and 12th respectively in the MXGP points table with the first three appointments of the 2016 season scratched-off the slate.

Team Suzuki World MXGP has a rapid turnaround now for race machinery and to again prepare freight for the Grands Prix of Argentina and Mexico and another two-race stint abroad. The popular Neuquen facility near Bariloche will host the second Argentine round this century on April 10th.

“I was happy with my riding. In the first moto I had a decent start but I had a problem with my tear-off because it cracked and I had to ride almost half a lap slowly before I could clear it and see properly. I was way-back and came from outside of the top-20 to sixth, which I was quite happy about. The track was really difficult with all the rain and that was good for me because I like those slow, technical kind of tracks. I didn’t have any arm-pump because you had to be precise on the bike and couldn’t gas it. I was feeling good for the second moto but my start was bad – I was happier with the first race performance! In the second I was stuck behind Bobby [Evgeny Bobryshev] and couldn’t catch him on the straight. Overall it was a decent weekend and a lot better than Qatar and Thailand. We will try to work some more for Argentina. We have changed a lot but there is still room for improvement. Everybody has worked hard and I want to thank the team for listening to us, and for all their effort. I think we can be positive – perhaps we should have had the podium – but I feel quite happy.”

“Just to give my best today was the plan. The illness side had gone but energy side from being in bed for four days was on the empty mark. The little I had in the tank I used up today. It was a shame but I have never experienced anything like it. I couldn’t feel my muscles and was just absolutely ruined; I feel like I have run two marathons today! Overall it was bad timing; this thing struck me on Tuesday and I was still in bed on Saturday morning. I know I will get over this in the next few days and will have to think about Argentina.”

“I’m really, really happy. If I think back to here a few years ago in the sand then I was lapped twice! I remember having a European 85cc race here and not even qualifying. So it was hard to come here, but I have done a lot of hard work in the sand and it paid off; I felt really good. I had to come from quite far out in the gate but pushed through and got on the podium. I have had a few podiums now but I think this is the most emotional one.”