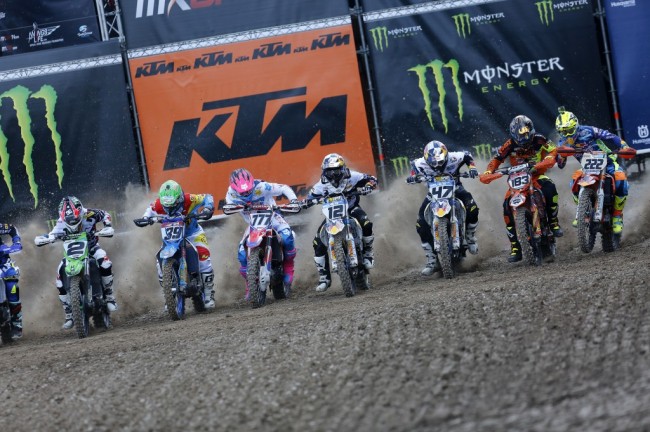 UDDEVALLA (Sweden), 04 July 2015 – Rockstar Energy Suzuki World MXGP’s Kevin Strijbos and Red Bull KTM Factory Racing’s Jeffrey Herlings had a firm grip on the slickness of Uddevalla today to qualify on pole for the eleventh round of the FIM Motocross World Championship.

Meanwhile in the sixth and fourth rounds of the European Championship EMX250 and EMX300, Kemea Yamaha Yamalube’s Damon Graulus rode solid for his second race win of the season while Marco Maddiicapitalized on an error made by the red plate holder Wilvo Nestaan Husqvarna Racing’s Yentel Martensfor his first.

The cat-like reaction speed of Wilvo Nestaan Husqvarna Factory Racing’s Dean Ferris assisted him in leading Rockstar Energy Suzuki World MXGP’s Kevin Strijbos, Team HRC’s Gautier Paulin and Rockstar Energy Suzuki Europe’s Glenn Coldenhoff around turn one. Ferris is looking pretty comfortable at the moment and managed to keep Strijbos at bay for the first few laps before being out braked into a turn and handing Strijbos the lead.

Strijbos was quick to pull a gap on Ferris who was being hounded profusely by Paulin. While Paulin tried to force an error or find an opening, the new red plate holder Yamaha Factory Racing Yamalube’s Romain Febvre was already on the charge.

After whipping around Coldenhoff, Febvre turned the battle between Ferris and Paulin into a three-way, briefly, but it was all too easy as neither could match his phenomenal speed. As the race went on, Febvre continued to shave seconds off of his lap times and soon challenged Strijbos for the lead. It was extremely impressive to watch the rookie challenge one of the most seasoned riders in the class for the win, but after a solid three lap effort, which had the massive crowd on their feet, used his noggin and settled for second.

Meanwhile Yamaha Factory Racing Yamalube’s Jeremy Van Horebeek started to emerge from the dust to challenge Ferris, who was pushed back to fourth by Paulin. In doing so, Van Horebeek made a charge up the inside of Ferris as they headed into the valley which was unlucky timing as Ferris got squirley and came slightly off of his line. Both riders collided and went down which left Van Horebeek in eighth at the checkers and Ferris back in eleventh.

Team HRC’s Evgeny Bobryshev then took over and finished fourth while Glenn Coldenhoff put in a solid ride for fifth.

The MX2 qualifier went down to the wire today in Uddevalla as the four fastest MX2 riders in the world went bar-to-bar to determine their grid positions for tomorrows racing.

Having had his collarbone plated less than two-weeks ago Red Bull KTM Factory Racing’s Jeffrey Herlings couldn’t have asked for a better start to the race as he led the way around turn one. At first his teammate Pauls Jonass was right on his tail but a cautious approach to the first lap dropped the Latvian back in the blink of an eye.

With Jonass dropping back fast, second place at the end of lap one was occupied by Monster Energy Kawasaki Racing Team’s Jordi Tixier who was grilled for five laps by Standing Construct Yamaha Yamalube’s Valentin Guillod who went wide around a banked turn for an epic run at the waves which he hit wide open for the inside line at the next turn and the second position.

Although Guillod got around Tixier, the race was far from over as the trio still continued to scrap for the top three positions. Also right in on the battle was Honda Gariboldi’s Tim Gajser who threw everything he had at Tixier but couldn’t get the job done.

At the checkers, Herlings remarkably managed to hold off a raged Guillod for his eighth qualifying heat victory of the season, while Tixier and Gajser were only 2.7 seconds back in third and fourth. Rounding out the top five with his best qualifying race result of the season was Rockstar Energy Suzuki Europe’s Jeremy Seewer.