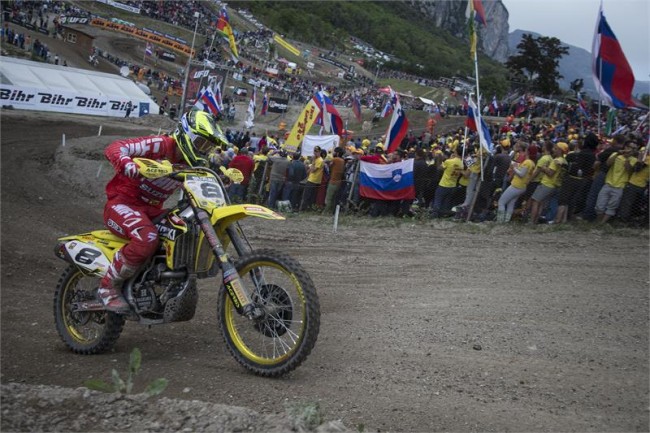 Kevin Strijbos rode to fourth position today at Pietramurata in front of 29,000 spectators for the weekend and the Grand Prix of Trentino in northern Italy by taking his factory RM-Z450 to a scorecard of third and sixth in the two motos across the damp Arco di Trento soil; his best result of the season.

The Belgian missed his first podium result of the season by just one point as Team Suzuki World MXGP team-mate Ben Townley captured 10th place despite entering the start gate in 22nd position.

MXGP was teased with good weather on Saturday morning and a dry set of practice sessions at Arco di Trento; hosting a Grand Prix for the fourth year in a row. The circuit was soon clouded over and downpours turned the narrow, stony and bumpy hard-pack into soggy mud and largely a one-line trajectory. Even more focus was placed on the necessity of a good start and Strijbos did reasonably well to slot into fifth place on Saturday while Townley suffered more bad luck and had to recover from a first lap crash to rise to 22nd place.

On raceday the climate was merciful, and signs of early summer were evident with clear skies and warmer temperatures. The course itself was still soggy and slippery in places but the rain had also softened parts and increased the technical demand.

In the first moto it was Strijbos who made a decent getaway and got into third place swiftly after the initial turns. The race leaders barely shifted positions as Tony Cairoli won ahead of Max Nagl and #‘22’ fending-off the attentions of world championship leader Tim Gajser to post his first moto top-three classification of the year. Townley was also strong and after chasing and passing Tanel Leok jumped across the finish line in seventh.

The second moto saw some fantastic action in the scrap for the lead with the race eventually won by reigning world champion Romain Febvre. Strijbos hovered on the edge of the top-five and only dropped to sixth place in the final two laps when Gajser’s charge back from a race crash proved too difficult to resist. Strijbos was seven seconds away from Jeremy Van Horebeek in fifth and the extra point he would have needed to dislodge the Slovenian rookie from the third step of the box. Townley was running in the top-10 and seemed to be set for ninth spot until a fall on lap 17 of 19 dropped him to 15th.

In the MXGP World Championship standings Strijbos has a total of 204 points and sits in seventh place. Townley – who missed two rounds through sickness – is 13th and with a 16-point gap to further elevation.

After three back-to-back Grands Prix, Team Suzuki World MXGP can finally return to their base in Lommel for a full debrief and time for further technical work ahead of another consecutive brace of events with the Spanish and French rounds on May 28-29th and June 4-5th respectively, both across the hard-pack tracks of Talavera de la Reina and St Jean D’Angely.

“It was a pity to miss the podium by just one point but there are a lot of positives to take from this weekend. My starts were good and I felt good on the bike. Actually I’m really happy with how things have gone all weekend. The start and the fact that I could push throughout the whole moto was great in the first one. I didn’t make such a good start in the second but I was riding well and together with Jeremy we closed the gap on the others. Gajser crashed and then he came back through. In the last five-six laps I just lost his rear wheel and the fact that he passed Jeremy on the last lap meant I lost the podium. Still, like I said, there are good things to take from this GP.”

“The first moto was pretty decent; I had an average start and got up into seventh, sixth at one point, but then Gajser passed. I struggled a little bit to be honest and wasn’t very happy with my riding. In the second one the start was pretty much the same and was pretty much eighth the whole race. I was riding better but then on the last lap crashed while Nagl was putting pressure on. I rushed into a turn and into the back of Gautier and tipped over. I made a mistake and paid for it. It was another average weekend in my opinion and I need to keep working and get better on Saturdays as this part has been a big Achilles heel for me. Starts as well. We’ll do some work before Spain and see what we can get out of it.”