Stewart U-turn – will race in Oz! 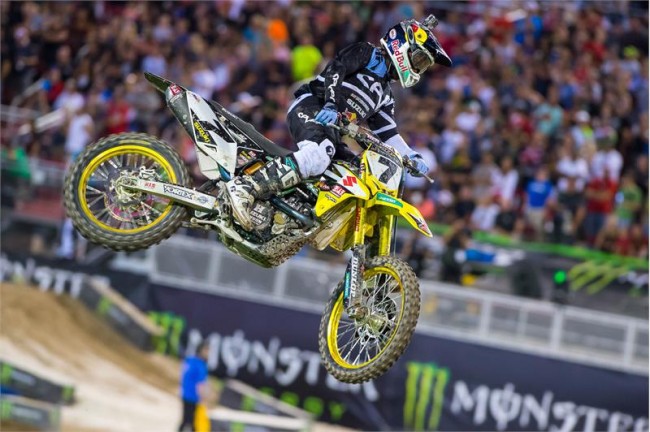 Whatever the reason, the Aussie fans will get to see Stewart v Reed in Sydney!

You can read the PR below:

Management of the AUS-X Open are extremely happy to announce that the power of the fans has persuaded James Stewart to overturn his decision and he will now race the events on November 28 and 29 at AllPhones Arena in Sydney, as originally planned.

After flying direct to the US after hearing the news of Stewart’s last minute cancellation AUS-X Open’s management sat down with the team and negotiated with James and his team to rejoin and race the event.

The announcement means that the famous Chad Reed v James Stewart is back on in a big way as both former world champions prepare to race for the AUS-X Open crown in Sydney.

“Once we landed in the US we made it very clear to James and his team how vocal and extremely disappointed the fans were at his last minute contract cancellation,” said Event Director – Adam Bailey. “We showed them all the backlash on social media from thousands of diehard fans here in Australia and this sparked James to jump back on board for what is set to be one of the country’s greatest action sports spectacles. James is a world champion and we thoroughly respect his decisions in racing and thanks to you, the fans, he has now made the right decision and will compete in Australia for the first time ever.”

Stewart worked out a reasonable schedule with the team that streamlines the trip and keeps his training and testing as close to on course as possible.

The multi-time AMA Supercross/Motocross Champion will also race the upcoming Bercy-Lille Supercross in France this weekend.

“I was pretty devastated to see the response after I announced I couldn’t make it to Australia,” said Stewart. “The fans have always been one of the best things about racing to me and after seeing the reactions, both good and bad, I knew I had to figure out a way to get down there. I spoke to the team and we worked out a couple things that can make it work. I’ve always wanted to head down there and race. There’s a lot of serious motorcycle fans in Australia and it will be good to get to Sydney and give them the show they deserve.”

The event is set to be the greatest action sports spectacular Australia has ever seen with free access to the paddock for all vans via the Monster Energy pit party, constant FMX shows from Showtime FMX, Djs, Fireworks, Cheerleaders and of course the Supercross racing and FMX ‘Best Trick’ feature the world’s best FMX riders.

Riders will also be battling for an additional $150,000 in prize money across the Supercross and Freestyle Motocross ‘Best Trick’ disciplines at the 2015 AUS-X Open, with the ‘Best Trick’ element the only one of it’s kind in the world in 2015 and the first-ever to be held in Australia.

After a complete sell out, a second AUS-X Open event was announced for Sunday November 29. A complete replica of night one, this second opportunity offers fans who missed out, the chance of a lifetime to see the world’s best Supercross and FMX athletes go head to head in one of Australia’s premier venues.

Tickets are available through Ticketek (www.ticketek.com.au). For more event information go to www.ausxopen.com

A partnership has also been formed with airline Virgin Australia. Travellers can save 10% on their flights to Sydney, by booking via the portal on the AUS-X Open website home page www.ausxopen.com.