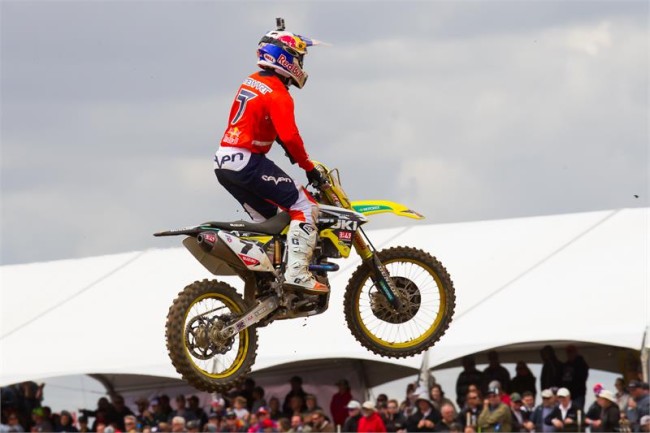 Yoshimura Suzuki Factory Racing had a tough start at the Lucas Oil Pro Motocross Championship season opener at the Hangtown Motocross Classic as crashes left both its riders departing the Sacramento area racetrack in California wearing arm slings; despite a podium position.

James Stewart’s day ended early in the first moto as he swapped in the turn before the finish-line and he crashed over an embankment, landing hard on his shoulder. The injury was painful enough that Stewart didn’t attempt to race in the second moto. His status for next week’s race in San Bernardino is day-to-day.

Blake Baggett’s day was more productive, since he finished third in the first moto, but Baggett ultimately left Hangtown with injury also after a crash in moto two left him with a broken collarbone.

Stewart ran in 14th in the early going of moto one when, on lap five, he crashed.

“I had a decent practice, but got a horrible start in the first moto,” Stewart said. “I was just riding around trying to get comfortable. I came across the mechanic’s area and the next thing I know I was grabbing and hanging-on to my bike trying to hug-it. I went off this steep embankment and landed on my shoulder.

“I’m bummed. I keep putting-in all this work and things keep happening. I can’t quit. As hard as it is now I refuse to quit. I know I’m not done. I’m going to go back to work after I have my shoulder checked-out. I’ll see how I feel. Hopefully I can get back into action next week. I’ll be back, it’s just another setback.”

The first moto was a major success for Baggett. He ran ninth on the first lap before tapping into the power of his Yoshimura Suzuki RM-Z450 and charged and worked all the way up to third by the end of the moto. In the second moto he again worked his way through the field up to sixth when he crashed with four laps to go and suffered the collarbone injury.

“Moto one went about as good as it could get, charging up from the back and working my way all the way back to a podium spot,” Baggett explained. “I really felt good and thought everything was working. I went out in the second moto and got a decent start and was working my way through the pack. I think I needed one more spot to get a podium for the overall. And then I caught a rock and did a little high side. It was slo-mo, but I ended up going down pretty hard and breaking my collarbone.

“We’ll see where we’re at and be back to fight for sure. I know where I am right now. Hangtown is one of the gnarliest tracks there is and if you can go good there you can do it anywhere. So I’ll regroup and hopefully be back soon.”

The Yoshimura Suzuki squad heads to Southern California and Glen Helen Raceway in San Bernardino, California on Saturday May 28th.