Stewart pleased to be back racing 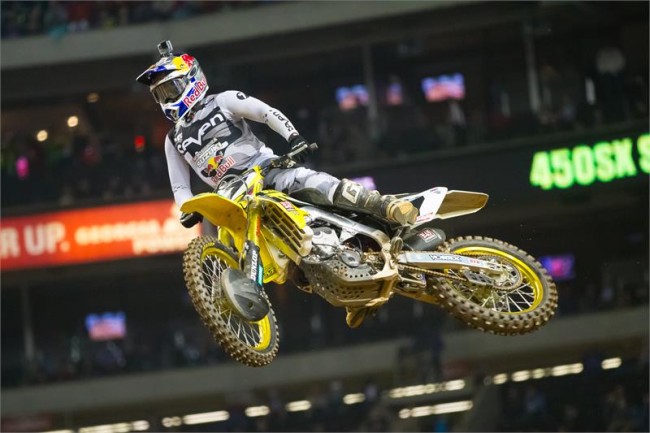 A 14th-place finish would not normally solicit a smile from Yoshimura Suzuki Factory Racing’s James Stewart, but considering the Atlanta Supercross on Saturday, in front of 61,683 at the Georgia Dome, marked the first Monster Energy AMA Supercross finish in nearly two years for the former champion, he viewed the race as an accomplishment.

Stewart finished the race in Atlanta hampered physically after jamming his knee in a qualifying race earlier in the evening. Many riders might have called it a night, but Stewart was determined to get a finish and he soldiered on even though he was far from 100 per cent. For Stewart, Atlanta marked what he hopes will be the beginning of a climb back to competitiveness after battling back from injury this season, which kept him off the Yoshimura Suzuki RM-Z450 for most of the year.

In Atlanta the results were not quite what fans have come to expect from one of the all-time greats of AMA Supercross, but as Stewart later explained, top results were not his primary goal on this night. He simply wanted to compete and get a race finish under his belt. The goal may have been modest, but to come back from what Stewart has gone through, he was happy to accomplish what he set out to do.

Stewart finished timed qualifying in 12th. He then ran second in his heat race before crashing late. That put him in the semi where he qualified for the Main Event, but in the process he badly jammed his knee. Even though there was considerable discomfort, he was doggedly determined to race, and finish.

He ran in the top 10 early on in the Main and eventually finished 14th. The fact of where he finished didn’t matter as much as it normally might – Stewart was content for now just to get back into the swing of racing.

“I’m just happy to be back and playing in the dirt,” Stewart said of Atlanta. “Today we worked on testing new pieces on the bike. We haven’t had a lot of testing time, so we came here and we were making a lot of changes. We made the bike a lot better for the heat race, but unfortunately I went down on the next-to-last lap.

“I went to the semi and was running third, all good, then I jumped in that dragon’s back and jammed my knee pretty good. After that it was kind of survival mode. Even though in the Main Event it was kind of survival mode, I refused to pull off. I’m happy we got through the weekend. It’s the first supercross race I’ve finished since April of 2014. I got 20 laps in and we’ll build off that. We’ve got some work to do, but you’ve got to start somewhere.”

Stewart said he is looking to move up as the season progresses.

“We found some things that worked well on the bike here and I think that’s going to make us better in the next few races,” Stewart explained. “14th is not the finish I wanted, but it’s better than a DNF. We’ll get there.”

Stewart’s Yoshimura Suzuki team-mate Blake Baggett continues to rehab an injured shoulder. So far he’s not set a timetable for his return. It will be dictated by the progress of his shoulder.