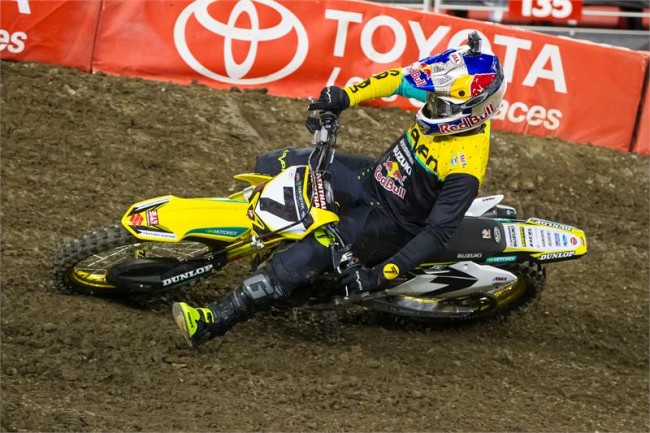 After a two-week break the Monster Energy AMA FIM World Supercross Championship got back into action at Santa Clara, California’s Levi’s Stadium home of the NFL’s San Francisco 49ers; and both of the Yoshimura Suzuki Factory Racing riders looked strong in their continued comeback from injury.

Blake Baggett nailed his first top-10 finish of the season aboard his powerful Yoshimura Suzuki RM-Z450, continuing his steady climb back to full strength from a serious shoulder injury.

And while Baggett’s progress was on course, perhaps even more impressive was the return of James Stewart. Stewart battled for the lead before finishing second in his heat race. He showed a glimpse of the speed fans love to see from a fully healthy Stewart, even though he is not quite back to 100 percent from his Daytona crash. Unfortunately, hard luck struck Stewart in the Main: After a sub-par start, he was working his way through the field when an issue on his bike, which the team is still examining, forced him to the sidelines.

While the results aren’t quite what Yoshimura Suzuki’s riders are accustomed too, they both took away positives from Santa Clara, with Stewart and Baggett obviously getting stronger every weekend. Both hope to finish out the remaining five rounds of AMA Supercross with continued improvement, while looking towards the start of the 2016 Lucas Oil AMA Pro Motocross Championship in Sacramento on May 21st.

Baggett came out of timed qualifying in 11th. He then made the Main by way of a third in his semi. At the start of the Main, he was caught behind a bottleneck caused by a crash in the first turn and was well back in 14th on the first lap. But in typical Baggett fashion, he ran stronger as the 20-lap final progressed and worked his way into 10th by the finish and his best result of the season.

“We broke into the top10,” Baggett grinned after the race. “It’s taken a while, but with the injury and making bike changes, trying to get more comfortable, we started halfway through the season and we’re coming along. So a top 10 tonight and we’re going to keep looking forward.”

Stewart, who qualified seventh before his strong second-place showing in his heat race, was understandably upset to have a bike issue put him out of the race, especially since he was riding so well.

“I was feeling a lot better since Daytona,” Stewart explained. “The day went pretty good. We made some fairly significant changes to the bike over the break and I was just happy to be back riding. Every practice kind of got better and better, which was good, and I was starting to find some speed.

“I got in the heat race, was feeling pretty decent and finished second. They dropped the gate pretty quick in the Main and I got a bad start and was way back. But then I was doing pretty good, started making my way through people. I was coming through the pack, feeling really good, probably the best since 2014 and that was nice. And then we started to have some sort of issue with the bike. It just started cutting out, so who knows. It’s no one’s fault. We all work hard to keep things together and we’re a team.

“I’m definitely bummed, but at the same time I was riding good, so we can definitely take some momentum off this. We made some great steps and we’re going to keep making them and get closer.”

The series now goes back east to one of the motorsports capitals in the world in Indianapolis, Indiana, and the Lucas Oil Stadium this coming weekend.