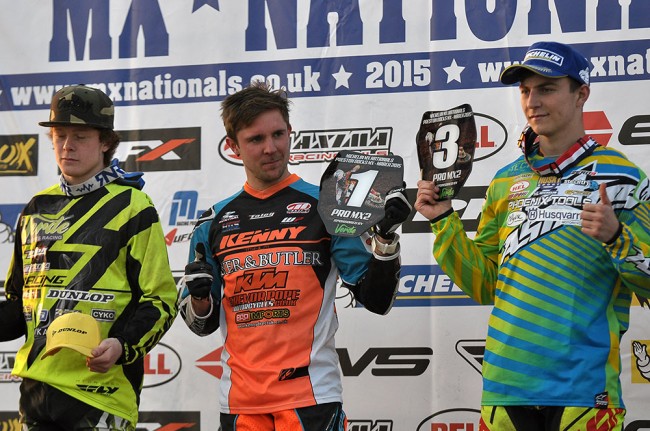 Dyer & Butler KTM headed north to the sandy circuit of Preston Docks, which hosted round 1 of the Michelin MX Nationals last weekend.
With the classes being combined a good qualifying session was going to be key. Steven Lenoir posted some fast laps early on and took pole in MX2 (3rd overall) while Liam Knight took 6th in MX2 (16th overall).
Race one saw both riders have an average start against the 450 machines.  Steven was just outside the top 10 and Liam just outside the top 20 on lap one.  Making head way fast Steven and Liam both moved up a couple positions, leaving Steven the second placed MX2 rider around the half way mark. Liam made a small mistake and dropped back a few places, only to pass them back in the closing stages of the race.
Race Result:  Steven Lenoir:  6th Overall, 2nd in MX2
Liam Knight:  14th Overall, 7th MX2With the power disadvantage against the 450 machines, both riders struggled to get a good start.  Lap one both riders were in a similar position to the first race, but with the overall result being split making passes early on was going to be key.  Lap nine saw Steven move into fifth (1st MX2) while Liam had now moved into 17th (8th MX2) and still pushing hard. As the race started to come to an end, Liam moved up one more position to 16th and 7th in MX2 while Steven took fifth at the chequers and the win in the MX2 class.
Race Result:  Steven Lenoir: 5th Overall, 1st MX2
Liam Knight:  16th Overall, 7th MX2

Liam Knight:  “Today didn’t go too bad, qualified 16th. Race one I didn’t get a good start, I came back to 7th in MX2, not ideal really. Race two was the same really.  I’m looking forward to my next race in Lyng for the Maxxis British Championship”

Steven Lenoir: “Today went good, I had a really good qualifying, 3rd and 1st MX2. First race I had a really bad start, i came back through I was feeling pretty tight by the end and had a little arm pump and I had bad lines. Second race I had a better start, but still not great. I came back good, I had some good lines and I was playing. I had a lot of fun in that race.  I came back to fifth and took the win in the MX2 class.  It’s been  a good weekend, feeling good and I’ll try to keep it cool and do it again.”