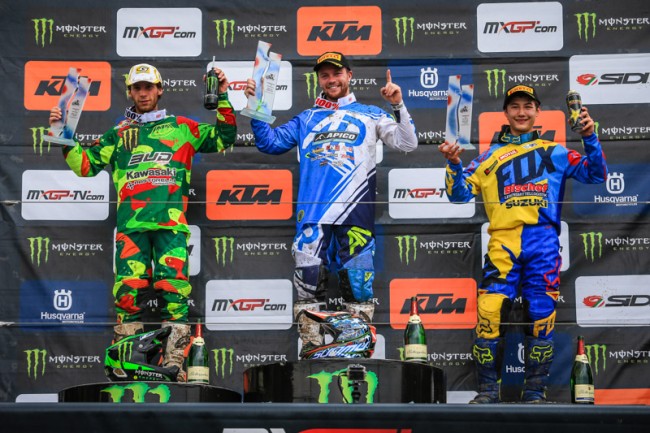 Temperatures were almost perfect here at the classic Talkessel circuit, where round five of the European Championship EMX250 took place. To the delight of the German crowd that flooded the awesome venue here in Teutschenthal, Rockstar Energy Suzuki Europe’s Brian Hsu stood on the podium for the first time in his career while Apico Husqvarna’s Steven Clarke, the defending EMX250 champion, also hit a career milestone with his first ever overall victory.

A few spanners were thrown in the works today with the drop of the gate. Turn one was chaotic with a bunch of riders going down in a heap, two of which are some of the hottest championship contendersMafi Yamaha MX Team’s Alvin Ostlund and HONDA JTech’s Nick Kouwenberg. One quarter of a lap later, yesterday’s race winner Kemea Yamaha Yamalube’s Damon Graulus stalled his bike in an awkward place and was planted by another rider, which left him out of the points at the end of the moto.

Following all that carnage, Wilvo Forkrent KTM’s Adam Sterry put an epic pass on the home soil heroRockstar Energy Suzuki Europe’s Brian Hsu and led the opening laps before taking on a wire fence, which captured him and put him out of the race.

Hsu was gifted the lead again but had his work cut out for him as the defending EMX250 champion Steven Clarke was hungry for his first race and overall victory. While the fans went wild for the young Suzuki rider, Clarke caused a bit of an upset when he scrubbed past him in epic style and ran away for the win.

Meanwhile the early championship leader Bud Racing Kawasaki Monster Energy’s Maxime Desprey used the experience he gained racing MX2 over the last two years to dice his way through the field for third.

A couple of new names were buzzing with their top five finishes too. Swiss rider Andy Baumgartner charged hard for fourth, narrowly holding off South African Nicholas Adams who also put in a solid performance for fifth.

The EMX250 is renowned for its depth of talent and totally unpredictable results. With combination of results from both races, Clarke, who has had a lot of bad luck this season finally got the monkey off of his back with a round win ahead of Desprey and Hsu. As for the championship, Sterry’s tangle with fence lost him the red plate. The Brit is now in fourth, ten points off of the new championship leader HONDA Jtech’s Nick Kouwenberg who was the most impressive performer today with his insane charge from dead last to seventh.