Sterry on the best MX2 GP of his career 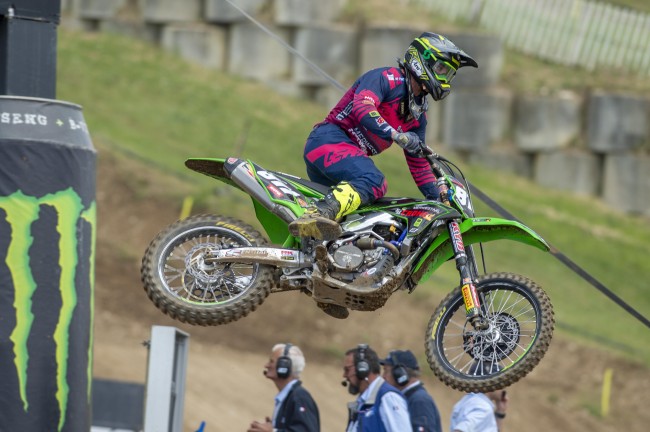 Adam Sterry of the F&H Racing Team recorded his best result of the season when he finished fifth overall in the French round of the FIM World MX2 Motocross Championship at Saint Jean D’Angely.

It was the reward for two error-free rides to sixth place by the Welshman around a stony track which was unforgiving to anyone who didn’t retain full concentration throughout two tough thirty-minute-plus-two-lap motos. From sixth on lap one Sterry maintained his leaderboard placing to the conclusion of race one and the boost in confidence clearly paid dividends as he raced as high as third in the early stages of the second moto to eventually secure yet another sixth place finish. His thirty-point championship haul has moved him into joint eighth in the series standings after seven rounds of the eighteen-event series.

Adam Sterry: “Finally I got through the first few laps without someone crashing in front of me! To be honest I never felt comfortable on this track but today I got two good starts; the gate had a strange reaction as it moved slightly before finally dropping but I reacted perfectly and nearly got the holeshot in the second race. Two good starts were the key; I pushed during the first few laps each time and then tried to ride two solid races. I’m very happy with my results; the best MX2 GP of my career. Next weekend we have a Dutch championship race, and we’ll keep improving to be ready for Russia.”

It was a difficult day for F&H teammate Henry Jacobi. The German moved forward quickly in the first moto from a tenth-placed start to take over fifth but shortly afterwards the German saw his front wheel slide out in a slick berm; relegated temporarily to ninth he regained one place before the end of the race to finish eighth. Race two initially followed a similar pattern as he advanced from tenth to sixth by half-distance but another fall saw him drop back outside the points-paying placings; he eventually finished seventeenth to surrender his third place in the series standings but will now regroup to claw back the slender seven-point deficit when the series resumes for round eight in Russia in two weeks’ time.

Henry Jacobi: “Saturday was quite good; I had a pretty easy race with a good start to finish third. Today the gate drop felt strange but I don’t know why; I was really scared to hit the gate and got two bad starts. In the first race I came back to fifth, then I had a small crash to finish eighth but that’s not what I wanted. In the second race I put in some good laps and was behind Adam when I lost control of my bike on a big downhill. I crashed really hard and lost a lot of time; when I got back in the race I came back to seventeenth from outside the top twenty. The results are painful for the championship but that’s how it is sometimes.”

Bike It DRT’s Darian Sanayei continues to go from strength to strength as he recovers from winter illness to advance from fourteenth to tenth, maintaining his lap speed from start to finish, in the first moto; the American repeated the performance in race two on his way from eighteenth to thirteenth for ninth overall. Brazilian teammate Gustavo Pessoa also posted consistent laps to advance from twenty-seventh to nineteenth in race one but narrowly missed the points in race two in twenty-first position.

Darian Sanayei: “This weekend was another step in the right direction. In the races today my jump off the gate was bad because I had an issue with the way the gate was dropping; it was strange to me and I felt I was going to run into it. Anyway I came from outside the top twenty in both races and had a decent flow on this nice track. I ended up tenth and thirteenth for ninth overall; now hopefully we can continue to progress. It’s been difficult for me as I still can’t train or practice during the week; I’m only racing for now as I’m still healing from my illness.”

Bud Racing’s Brian Moreau, born and raised in the vicinity, had the speed but little joy in his home GP. The French teenager rounded the first turn fifth in the opening moto but already a few seconds later he tumbled downhill from turn three; after two further falls he pulled out of the race but regrouped for race two. Gating sixth, he stayed cool to post a career-best tenth-placed finish.

Kawasaki had a successful weekend in the FIM European EMX250 Championship as Roan van de Moosdijk of the F&H Racing Team raced to victory in the second moto on Sunday morning with a scintillating pass two laps from the finish. The Dutch teenager’s chances of the weekend overall had been spoilt on Saturday when an early fall in race one after he had quickly advanced to fifth dropped him temporarily to nineteenth before striking back to finish twelfth; his thirty-four point haul over the two races sees him advance to a secure third place in the series points standings. Jimmy Clochet of Bud Racing Kawasaki, second in the first moto, was initially in fourteenth place in race two and advanced to eighth at the chequered flag to secure fourth place overall and move into the series top ten.

Roan Van de Moosdijk: “My start in the first race was Ok as I was in the top five, then I passed Fernandez but he hit me and we crashed; our bikes were a little bit bent and I could only come back to twelfth. Today was much better; I was second in the first corner and almost all of the race as it was difficult to pass. I eventually managed it three laps before the end of the race and then I pulled away. It’s good for the championship and for my confidence; now I’m third in the standings and can focus on moving further forward.”