Sterry on his Indonesia 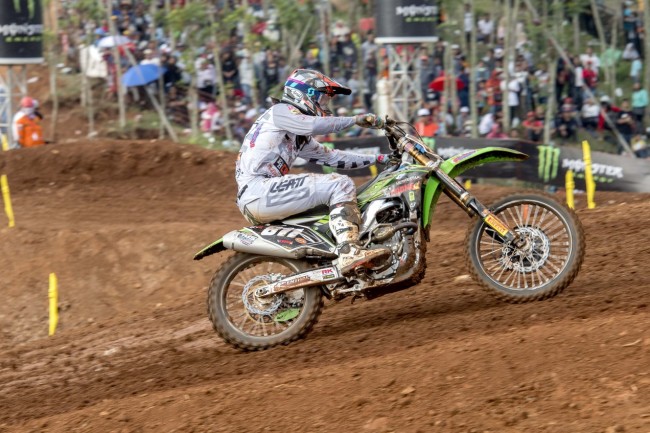 The lone rider for the F&H Racing team during the Grand Prix of Asia was Adam Sterry but he had quite a good weekend with two top ten moto finishes. Sterry finished the moto’s in eighth and tenth at the Semarang circuit which meant he secured tenth overall. The Brit has now moved up to fourteenth place in the world championship standings. Jorge Prado won the GP to tie with Pauls Jonass for the championship lead but the Latvian keeps the red plate due to having more moto wins.

At the start of the first moto, Sterry took a good start as he was eighth around the first corner but by the end of the first lap he worked his way into a great fifth position. The Brit stayed there for around ten minutes but then made a mistake which meant Rodriguez found his way around. Sterry closed the gap up to Cervellin and was looking for new lines to try and make a move on the Italian. However, with three laps to go, Sterry took a crash and when he got running again he was eighth. It could have been a better result but the speed was good.

Just like in the first moto, Sterry took another good start which shows he is making good progress from getting out of the gate. The F&H Kawasaki rider was sixth around the first corner but unfortunately, he made a mistake on the first lap. When he picked himself up and got going again he was in eleventh position. In the end Sterry ended up tenth which is solid points for the championship. Overall the two fly-away races in Indonesia have been positive for him, he’ll hope to build on this as he heads back to Europe for the rest of the season now.

Adam Sterry: I wanted to build on the race last weekend in Pangkal which we managed to do. I didn’t really feel comfortable on the track all weekend and struggled but in moto one we got a terrible start and managed to get to 6th. I stayed there until a small mistake with three laps to go.

In the second moto I was 10th after a crash on lap one and I got my foot stuck under the bike so was a bit behind the pack. I’m looking forward to the next few GP’s they’re some of my favourites.

The F&H Racing team heads back to the Netherlands with the final round of the KNMV Dutch Masters of Motocross taking place this weekend. The following weekend the Grand Prix action resumes in Loket.