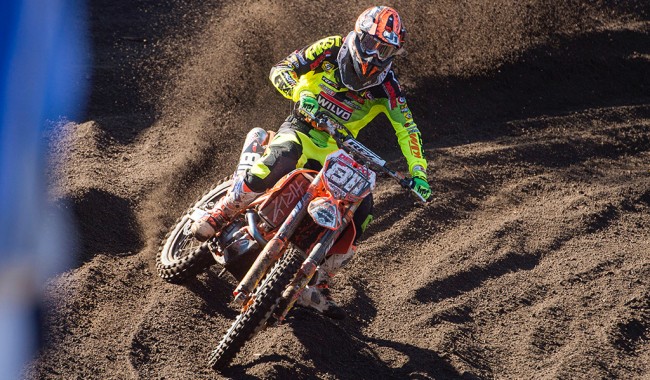 After a marathon 35-hour journey, the Wilvo Forkrent KTM team finally arrived in the glorious province of Patagonia in Argentina for round three of the Motocross World Championship with riders Steven Frossard and Adam Sterry. Following the short distance from the hotel to the circuit, the team were greeted with a fantastic track set in wonderful surroundings with clear evidence from the outset that the organiser had invested the time and money needed to make the GP one of the best on the calendar.

Qualifying
Adam Sterry, making his GP debut in MX2, nailed a perfect holeshot in qualifying before crashing on the next turn, dropping him to the back of the field and leaving him with a mountain to climb. The youngster was fired up and managed to blast his way through to 17th place within two laps, but was again a victim of bad luck, as Petrov decided to give him a Bulgarian love tap which unbalanced him and cost him two places before he managed to get some rhythm back to finish 18th.

Frossard made an average start in qualifying but lost a number of places on the first lap and was well outside the top twenty. Struggling to find any rhythm in the first half of the race the Frenchman suddenly found his groove later and started to pick his way through the field. With lap times matching riders in the top six he soon progressed through the pack eventually finishing 13th.

MX2 Race 1
Sterry made another blistering start and was second round the first turn before passing Seewer for the lead. Inevitably he had to give ground to the big hitters but was still in 6th by the end of lap two, then missed a rut on the next lap and went down. After picking up in 11th he rode well throughout the rest of the race and even made an audacious pass on Tonkov a couple of laps before the end before the Russian rallied to take the place back leaving Sterry to take a brilliant 11th place finish.

MX2 Race 2
Disaster struck at the start as Anstie went too early ramming his gate and causing Sterry to release a split second prematurely, hitting his gate and leaving him at the back of the field. Unbelievably, the 18-year-old somehow managed to blitz past a huge chunk of the pack to finish the first lap in 12th position. After pushing on he squeezed into the top ten but started to suffer from blisters and had to battle through the pain to finally cross the line in 11th again, which gave him an incredible 8th overall for his MXGP debut.

MXGP Race 1
Frossard made a reasonable start but again lost places on the first lap leaving him down in 18th. Battling hard throughout the race and finding his rhythm again, he managed to make a number of passes to progress to 13th at the finish.

MXGP Race 2
Hoping for a better second race, Frossard started positively but found himself in 11th place as they went through the whoops for the first time. Within the next turn he unfortunately lost five places and found himself further down the pack. Within a lap he had pushed hard and managed to claw his way back to 13th but got stuck behind Guarneri for the rest of the race. Try as he might, he just couldn’t make a pass stick and had to settle for his second 13th place finish of the day giving him 14th overall.

Commenting on the weekend Steven Frossard said: “Qualifying was not so bad but I think like all the weekends so far, the first three to four laps were difficult for me to keep my place because of last weekends crash. I’ve not got enough confidence for the moment. First race and second race were almost the same as the qualifying race – I had some good speed but was too far back in the beginning. I’m just happy to finish my two motos with no crashes.”

Adding, Adam Sterry said: “What an experience this weekend has been and one I’ll never forget. Qualifying went well and I got the holeshot but crashed in turn two. I managed to get back to 18th, which I was pleased about. As the start is fair it meant I was confident going into the races. The first race I nearly got another holeshot but didn’t go for it as hard as I did in qualifying because I didn’t want to crash again, but second position was good regardless. In turn two I made a pass for the lead and for a few corners I held it, which was an awesome feeling. I crashed later on that lap and ended up finishing 11th, which for my first ever MXGP race I was pumped with!

“During the second race the riders either side of me hit the gate which made the ones around stutter and I ended up hitting mine. I was really aggressive for the first two turns and came out 12th and I ended the race in 11th again which gave me an 8th place finish overall which is fantastic for my first GP. The whole weekend was awesome for me and I couldn’t be happier with how it turned out. I’d really like to thank everyone involved for making it possible.”

Summing up the weekend, Team Manager Steve Turner said: “The weekend was pretty damn good, especially after the recent dramas. Steven was a bit low in confidence but battled hard all weekend to get two really solid results.

“Adam was a revelation. There was no shortage of excitement with him. He took one holeshot, second out of the gate in the next before leading it for bit and then hit the gate in the last race start but amazingly managed to pass twenty riders on the first lap. Eighth overall in his first GP is no mean feat. He’s pretty happy at the moment and will be going to Lyng with his confidence on a real high.”