Sterry and Jacobi on Loket 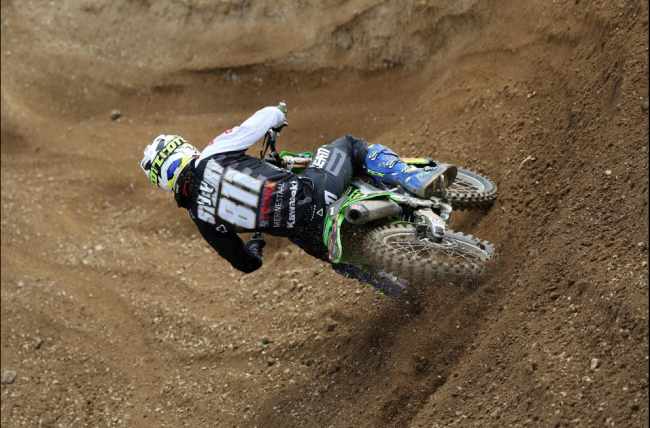 Heading into the Czech Republic GP at Loket, Henry Jacobi was feeling good after clinching the Dutch Masters title the week before. Both Jacobi and Adam Sterry done a great job for the F&H Racing team at round thirteen of the MX2 World Championship.

The weekend started well for Jacobi as he had a strong third in the qualifying race which meant he went into the main races on Sunday feeling good.

When the gate dropped, Jacobi good a good start on his Kawasaki as he was sat in fourth with Sterry further down the pecking order but still in a strong tenth. The top four stayed reasonably close until around the halfway point in the race when Vialle and Vlaanderen collided. It meant Jacobi got promoted up to second and that’s where he finished. It was a strong moto for the German and meant he had a good shot of an overall podium. As for Sterry he made progress on a difficult and bumpy circuit. After battling with Larranaga, the Brit was strong in eighth but ended up finishing sixth – a strong race for him as he looked at home on the tough old school track.

Both F&H Kawasaki riders were very well placed at the start of the second moto – both in the top five. Jacobi was sat in a strong third with Sterry two places further behind in fifth. After ten minutes, Jacobi moved forward after passing Vialle so it put him in a strong second spot. Sterry was riding with a really good flow and found his past Vialle and Vlaanderen into third. It wasn’t long before Sterry found himself on the back of his teammate, Jacobi. With two laps to go, the Brit made the move on his teammate and ended up second, the best moto of his MX2 career. With a third-place finish, Jacobi knew he was on the podium with a second overall. Unfortunately, Sterry just missed a podium by a point but still had a great weekend, nonetheless. The F&H Racing team left Loket in very good spirits.

Henry Jacobi: “Ever since my last podium at Matterley Basin we knew that I had the speed for podium results, but I got too many fourth positions! Finally I rode without any mistakes again and after two good starts I could ride two strong races. All the lines were broken on the track after the first MXGP race; I watched that race so I knew that you had to use the outside lines in our second moto. It was good for me to get a great start in the second moto, then when Adam came I knew that a third position was enough to get the podium so I didn’t risk making any stupid mistakes. And two-three is great for spirit in the entire team”.

Adam Sterry: “This has been a very positive weekend for me. In the first moto I didn’t get a great start and worked my way up to sixth, then my start in the second moto was better and I pushed all race to finish second. I just missed the podium by one point, but the most important thing is that I was very happy with my riding and I’ll take that to Lommel next weekend.”

This weekend, the team heads to Belgium for the MXGP of Lommel in the tough sand. The EMX250 series also resumes which means Roan van de Moosdijk is back in action.