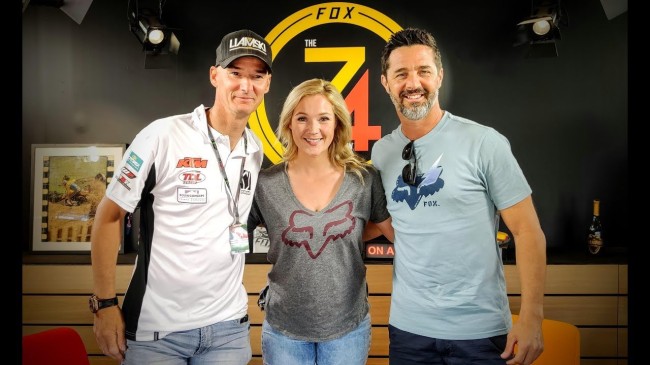 Jeff Emig and Georgia Lindsay held a very good interview with the greatest motocross rider of all time, Stefan Everts, at the French GP.

Stefan talked about his current health situation and also how he is helping Liam, along with thoughts on his own career.

“I was in a coma for two weeks, a life and death situation,” admitted Everts on his close he was to not making it through, revealing no-one had ever had that much Malaria in their blood and survived.

“I got through it but I am still removing from that,” said Everts. “My right foot is still a problem I am still healing with my operation on my toes. My biggest challenge is to be on a motorcycle again even with a smaller foot (losing his toes).”

On his if his near-death experience changed him Everts said yes, revealing: “I am a lot more quiet in life, I used to be like a hurricane, now I am more calm.”

Everts then opened up on the difficulty of coaching Liam after having a very tough dad himself in Harry and the pressure of living up to a world champion father.

“I try to be a better version of my dad, my dad was very tough on me. It’s not an easy position for me but also for Liam, he is the third generation of the family to be racing and step in my boots it’s not an easy thing to do, but his passion is motocross and he loves it.

“I give him the best support I can and try to be as supportive as possible. That’s not always easy because I am a very determined person, I always want to be the best and win and I want my boy to be the best and win! Sometimes we have got some difficult conversations and some heat going on after the races.

“He’s still young he’s 14 years old, he’s still small and needs to build experience but sometimes I want him to be faster!”

Everts also admitted his wife thinks he can be too hard on Liam! “She thinks sometime I’m too tough on him, but my dad was very tough on my but if you look at where I ended up in my career it’s thanks to his support that he gave me and how direct he was. He taught me how to work and to be very critical of what you do. I’m a critical guy and if I see mistakes of how he’s doing, I’m unto him. If I don’t tell him, he won’t know.

“I know how tough it was to fulfil my fathers boots, I had had a lot of pressure for many, many years because I wanted to be at least as good as he was in his career and he was four-times world championship. As soon as I won the fourth championship I was like, ‘woo, now I’m happy.’

“I want Liam to learn to take this pressure away from himself, not to be as good as his dad, to be the best he can be every day, he needs to find his best riding on each track every day, and when I see that I’m a happy dad. If he finishes fifth or tenth and I see he rides his best, then I am happy.”