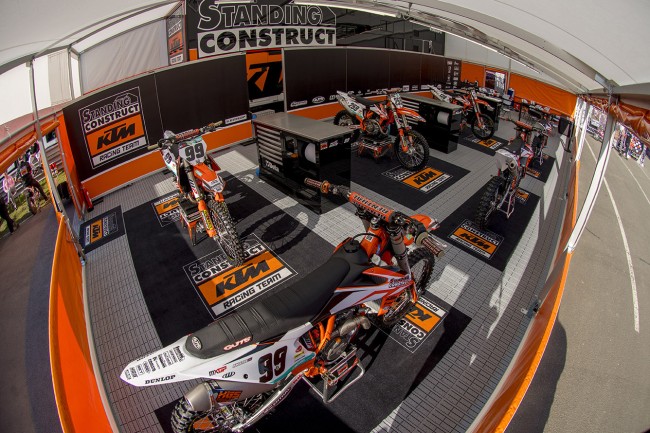 KTM MXGP satellite team Standing Construct KTM have already established that they will drop from three to two riders for the 2020 FIM World Championship with news that Max Anstie’s contract will not be renewed next season. The Belgian crew are expected to announce the second athlete alongside Glenn Coldenhoff in the days after the Grand Prix of Italy at Imola but Ivo Monticelli should keep his slot.

“I always said I wanted a two-rider team because when I do something, like my business, I do it at 100% and the maximum possible,” said Team Principal Tim Mathys of his original intentions for 2019. “But late last year I learned Max still didn’t have a ride and I thought ‘how is that possible? He won the Motocross of Nations less than a year ago…’ I contacted KTM and they were enthusiastic and that’s how we became a three-rider team. I made some big investments because an extra rider means extra resources, vans, workbenches, staff. Red Bull KTM will have three riders in MXGP next year and because we also have some factory material I think it will be difficult for them to carry six.”

Mathys was recently in negotiations with KTM to again run Anstie but finally communicated that the Englishman, who won the second moto at the Grand Prix of Belgium at Lommel and will represent Team GBR at the Nations at Assen, would not remain in orange with his crew.

“So many things are important in motocross now and one big one is the budget to go racing,” Mathys says. “My company is a very big sponsor of the team but the money we invest in motocross has to pay off. It would be easy to say ‘let’s add 2-300,000 euros to the budget’ but it’s not that simple. That also has a bearing on what riders we will take.”

Coldenhoff seems very settled in the environment where he celebrated his first Grand Prix win (in the MX2 class at Matterley Basin in 2013) and will enter the second year of a two-term contract with KTM. The Dutchman, who lacked a winter of preparation after fracturing two vertebra, grabbed the team’s first podium finish at Lommel and is hopeful to star again at the Nations on home soil during the final weekend of September. “One advantage of having Glenn as a rider is that he works day and night and doesn’t stop,” Mathys claims “so I was confident he could come back to his former level, he just needed some time and he proved we were right at Lommel. He missed the whole winter physically and testing and really needed the confidence of the team.”

Monticelli meanwhile must rank as one of the most improved athletes in the class. The Italian is contesting his second season in MXGP and is a respectable 12th in the standings with nine top ten moto results. “I really like what Ivo has done,” Mathys assesses. “We took a guy in whom nobody believed and put him on a strict training regime and gave him everything he asked. Nobody would have thought Ivo would have made those speeds and results like and 8th place in the second moto in the Lommel sand.”