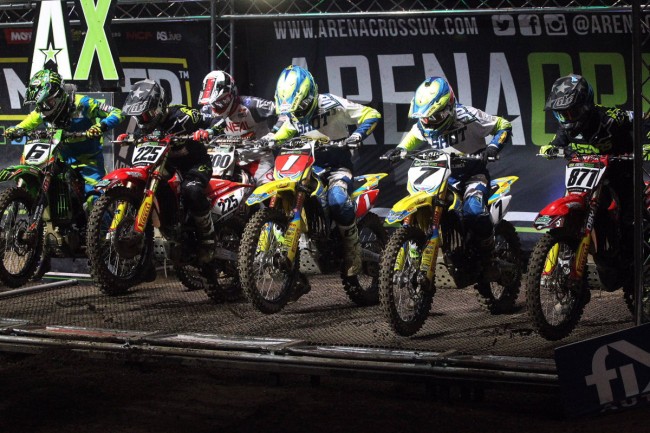 A wise man once said that life is like a box of choclates. You never know what you’re gonna get. That certainly applies to Arenacross too! Now more than ever in fact, thanks to a stacked field that includes stars like Dan Reardon, Cedric Soubeyras, Evgeny Bobryshev, Angelo Pellegrini, Fabien Izoird and Adam Chatfield. Simply put, the level of competition has never been higher.

However both Thomas Ramette, triple Arenacross UK champion and former European SX champ and Cyrille Coulon, former French SX1 champion had a lot of eyes on them in the Manchester Arena. Because Ramette entered the series defending his title while Coulon led the 2017 series until he picked up a knee injury. Thomas had a less than perfect evening but the 26 year-old Frenchman turned disaster into damage limitation via the LCQ and a solid main event performance.

Entering its sixth year the Geoff Walker managed SR75 World Team has also earned a reputation for excellence both on and off-track as well as a knack for doing things a bit differently. Being a truly global team the SR75 World Team Suzuki competes in the UK, the biggest French Supercross races, selected AMA SX rounds and high-calibre one off events like the Monster Energy Supercross and Red Bull Straight Rhythm. So you will litterally be able to spot Thomas and Cyrille competing in Shot Race Gear around the world.

The SR75 development team consisting of Howard Wainwright and Callum Mitchell has joined the Shot Race Gear family too. Wainwright and Mitchell are set to race the MX2 British Championship and possibly some EMX250 rounds. Both guys receive the guidance of former GP moto winner Carl Nunn while they will hone their supercross skills with Cyrille Coulon and Thomas Ramette.

Geoff Walker, owner/manager: “I’m very excited that SR75 World Team Suzuki has joint forces with an epic brand like Shot! The guys absolutely love the gear and having raced myself at pro level I know how important it is for riders at the highest level to be totally comfortable and confident on the track. To be honest I’m reasonably obsessive. Everything has to be as perfect as it can be. That’s how Shot goes about their racewear as well. I think that’s why Shot Race Gear is a great fit for the SR75 World Team Suzuki.”

Serge Guidetty, Shot Race Gear athlete manager: “We’re super stoked to work with Thomas Ramette, Cyrille Coulon and the whole team. What Geoff (Walker) has built is absolutely unique and their commitment to indoor motocross speaks volumes about their passion for the sport. If it’s challenging and fun these guys will be there to race, no matter where in the world! The energy the SR75 World Team Suzuki brings is second to none so that makes them incredible ambassadors for Shot Race Gear. Congrats to Cyrille and Thomas for their strong start of the championship!”