SR75-MOLSON returning to Arenacross in 2016! 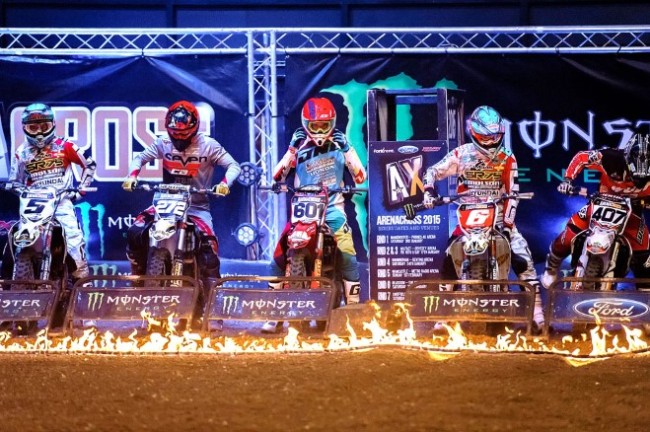 2015 Arenacross Champions, SR75-MOLSON Racing make a powerful return to the tour in 2016 spearheaded by two of France’s most accomplished indoor stars – current AX Champ’, Thomas Ramette and Glasgow Main Event winner, Cyrille Coulon. And with full support from Suzuki GB, the team has never been better positioned to defend their title.

Now known as SR75-MOLSON Racing SUZUKI, team owner, Geoff Walker, has been working tirelessly to return to the 2016 Monster Energy Arenacross Tour more prepared than ever before.

“We’ve worked exceptionally hard in the background putting together the right package for two incredibly talented riders” explained team owner, Geoff Walker. “We are very proud to be one of the most successful Arenacross teams in the UK with two pro team championships and one pro title, so to keep standards high and surpass everything we have achieved so far is always, although difficult, going to be our goal. I’m more confident than ever in my riders that between our partners Molson Group and Suzuki GB the package will be right to continue having fun and racing to our maximum. I know there is a lot of very accomplished teams involved in the series and we will enjoy the challenge of the competition”

Series promoter Matt Bates is also overwhelmed that Suzuki have stepped in to support the team. “Geoff through his SR75 team has supported the Arenacross tour from the outset and I have to say that his professional set up and dedication has lifted the entire series. It’s also great to see that Suzuki are now more active in the team as its massively important that the UK motorcycle importers see Arenacross for what it is – a great place to introduce people to motorcycling in general”.

“Winning the series last year was an amazing feeling for me” said 2015 Champ’ Thomas Ramette. “Cyrille, Geoff and I are a really strong and close team, so when we lifted both Pro Titles in London earlier this year, the feeling was incredible – you work so hard, every lap of every race counts and as a rider there’s no better way to say thank you to your sponsors – I can’t wait to return and ride with Number 1”.

Click here to get your tickets and see SR75-MOLSON fight to retain their crown!