Soubeyras not happy at being disqualified for taking Chatfield out! 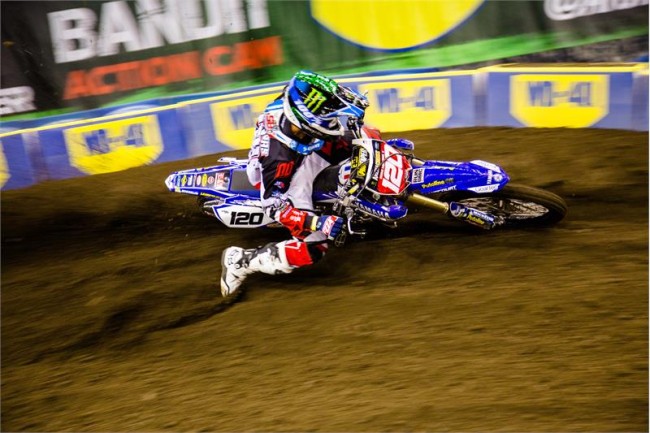 The fourth round of the Monster Energy Arenacross Tour at Belfast SSE Arena last night threw up a spate of Pro class incidents, with Cedric Soubeyras wiping out Adam Chatfield in the Head-to-Head semi-final and getting the red card.

The exchange between the two riders saw Soubeyras colliding with Chatfield in the first corner of the first lap, sending the Buildbase Honda rider to the ground and damaging his bike in the process. Although, on the night, Soubeyras went through to the third and fourth place decider against Thomas Ramette, and was awarded the final point, a post-event review by the MC Federation, the licensing body of the Arenacross Tour, declared that the Geartec Yamaha rider’s move was unacceptable and not in the spirit of the event.

Adam Chatfield; “Basically it was dirty riding and I think he at least deserves to have that point deducted, as he was in the wrong. The head-to-head is supposed to be a no contact race. I had the inside covered but he went all out to intentionally hit me and it was a hard ram. I was lucky not to have damaged my shoulder or broken my hand. It’s all very well saying sorry, but that’s too late when the damage is done.

When questioned as to whether he sees this evening’s return to the SSE Arena as something of a grudge match, Chatfield simply signed off with; “We’ll see. You just never know what’s going to happen.”

Cedric Soubeyras; “I’m very disappointed and angry with the decision. I made a mistake and was penalised straightaway which I completely accepted. They had already punished me by disqualifying me from that actual head to head. I don’t understand why they let me go out against Thomas and have a chance of winning a point, if they were only going to take it away. It makes me angry that they left it so late when it should all have been sorted on the night. I feel like I’ve been double penalised and that’s unfair for something that was a mistake and I straightaway apologised to Adam.

“Tonight’s a new round and I’m going to go all out to prove myself. I’m still the red plate holder and intend to keep it that way.”

Summing up, Arenacross Tour promoter Matt Bates of e22sports said; “Not sure if I completely agree with the MCF’s decision but, as the promoter of the tour. I have to respect their decision as do all of the riders. The reality is they have made it clear regarding no contact in the head to head races so that’s what the riders have to respect. I’m sure they won’t listen though!”

Round five of the fast-paced Monster Energy Arenacross Tour returns to the SSE Arena Belfast tonight. The programme starts at 7.30pm and, for anyone wanting to catch the latest action, a few tickets are still available on the door.