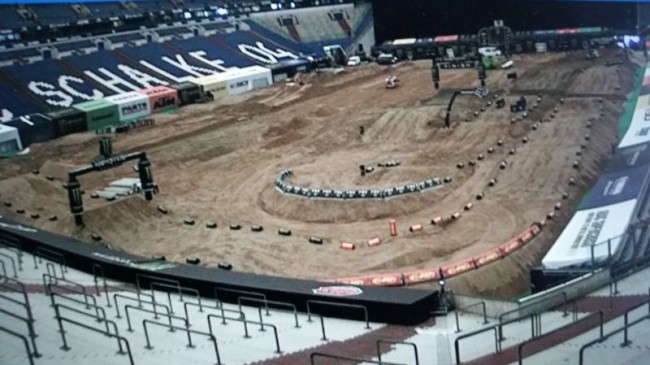 The only time all the three world champions will face-off is tomorrow night at SMX cup in the Veltins arena in Germany!

When Ryan Dungey opted out of the MXON and Gajser missed the event due to a injury, it left only Jeffrey Herlings as a 2016 world champion at the event and he duly won his class and the main 450 moto at the end of the weekend.

But now he has Dungey and Gajser for company and this time it’s in a stadium. Of course you would have to give Dungey the edge here since he is supercross champion and spends most of his year riding tight indoor tracks, but, when Tim Gajser saw the track today he said: “It’s actually indoor motocross,” so maybe the MXGP champions won’t be at as much of a disadvantage after all.

Herlings and Dungey of course ride for the same team so it will be interesting to see who gets what gate pick (along with Musquin) with the orange team as that could significantly increase or decrease the chances of victory depending on the start.

Herlings has been practicing supercross this week and says he is starting to love it while Tim Gajser will be chomping at the bit to race indoors against Dungey and show the to Americans he is fast in that setting too – he will also race the MEC next weekend in Vegas.

Of course when you add in Romain Febvre, Marvin Musquin and the under-rated Jordi Tixier it makes six former or current world champions at the event and that doesn’t include former AMA 250 supercross champ Jake Weimar who is still searching for a ride in 2017 – maybe a good outing tomorrow night will help his cause.

KTM are hands-down favourites for the manufactures cup but the individual title could well be a real fight between the world champions – past and present.