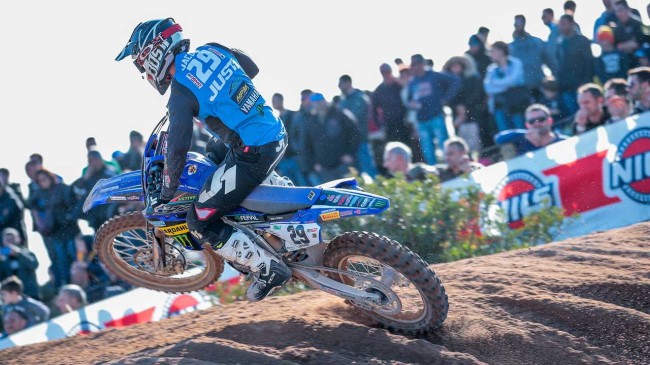 Positive weekend at Riola Sardo (OR) – Italy for Team SM Action Yamaha: Renaux was fast straight away in MX2, he made the pole position and he reached the podium in Race 1. Good debut for Jacobi in the MX1, as he was close to the “top 10”. An issue at the start compromised Adamo’s race, but the Italian was fast in Qualifying.

For the official start of the 2020 racing season, team and riders went to the hard and insidious sand-surfaced circuit of Riola Sardo (OR) – Italy, an historical place that hosts since many years the first round of the Internazionali d’Italia MX. The riders of MX1, MX2 and 125cc went on track during a weekend that had spring temperatures. After a long time of preparation in Sardinia, Team SM Action Yamaha had its complete line-up with the German Henry Jacobi in MX1, the French Maxime Renaux and the Italian Andrea Adamo in the MX2. At the end of the Timed Practice sessions, both riders of the MX2 showed some good speed: Renaux gained the first Pole Position of the season, while Adamo, after a great performance, was 6th in his group and 11th at the starting gate. In the MX1 Jacobi finished just outside of the “Top 10” as he was 11th.

At the beginning of the afternoon the MX2 race had its start. Maxime started very well as he was in the “Top 5” straight away. For the whole race the French behaved very well, he fought for the top position and he tried to attack the two riders ahead of him. Unfortunately, he made a mistake and he moved back, but after a good recovery he gained a satisfying 3rd place that sent him on the podium at the end of the day. Bad luck hit Adamo instead; his bike switched off at the starting gate and when he restarted it, the group was already far away. The Italian made a few laps but then he decided to go to the box, so he could not qualify for the Supercampione race. In the following race, valid for the MX1, Jacobi was 8th straight away, and kept a good pace in the “Top 10”. Unluckily, a little slip at half of the race made him moving back to the 12th place, where he finished the race.

In the Supercampione race both Team SM Action Yamaha riders were out of the “Top 20” at the end of lap 1. Maxime started well though, as he was 2nd, but what ruined his race was a contact at turn 2, when he fell off. He jumped back on the bike straight away, and after a great recovery he finished 10th. Jacobi instead did not make any mistakes, but his recovery was less furious: he was 16th at the checkered flag. The “Internazionali d’Italia Motocross” will be back next weekend for its second round. The track that will host the races will be Ottobiano, a circuit that hosted World Championship’s races already and which has once again an insidious sand surface that will put to the test riders and engines.

Maxime Renaux #959: “It was a good weekend. At the Qualifying session I made the Pole Position after a great lap. In the race I started well and I was 3rd straight away. I only made a little mistake around the middle of the race but I recovered well and I gained the podium at the checkered flag. In the Supercampione I started well again but a contact with another rider made me fell off. After a good recover I made it to the 10th place. I’m really happy about my pace and my bike. It was an important race to understand where we are with the preparation, we still have work to do to be at the 100% for the beginning of the MX2 World Championship but we are on the right way.”

Andrea Adamo #80: “What to say…it was a day with up and downs. In qualifying a little technical issue forced me to change the bike and I got a little nervous, but luckily I made a good lap and I finished 6th in my group. For the race I had a great feeling but the bike started to have issues. First it switched off, and when it restarted I didn’t feel as good as before so I decided not to risk and I retired. The first races of the season can go like this, we need to understand where to go with the development of the bike. Anyway, in one week time we will be at Ottobiano, I feel good and I can’t wait to go back on track.”