SJP Moto move to KTM as they introduce 2021 Line-up 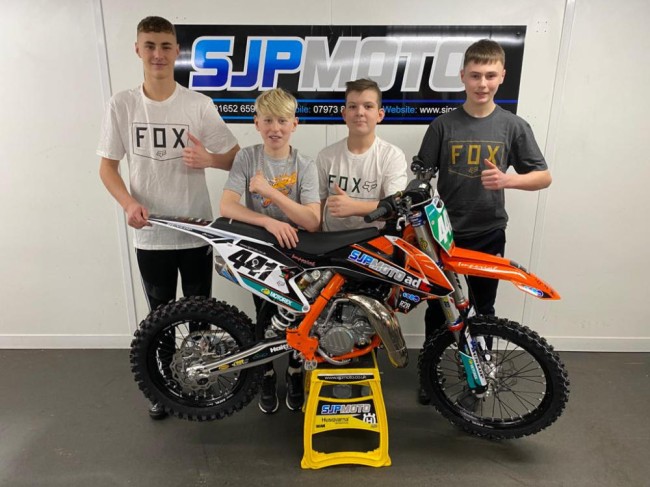 Following a successful 2020 season, SJP Moto are pleased to announce their rider line up for the 2021 season. For the new season, the team will be making the switch to KTM machinery after many years on a different brand.

For 2021 the Official SJP Moto KTM teams four-rider line up will be headed by Charlie Heyman and Jayden Haigh on the 125cc machines, while Billy Askew will remain on the Big Wheel 85 along with Reece Jones on the Small Wheel machine.

After claiming the Michelin MX Nationals Big Wheel 85cc Championship in 2020 where Charlie Heyman went unbeaten all year, the promising youngster will be moving up to the 125cc KTM for 2021 and looking to claim the MXY1 title at the MX Nationals. Alongside Heyman on the 125 is Jayden Haigh who will be pushing to improve on his results from 2020 and aiming to be challenging at the front in his second season on the 125.

Remaining on the Big Wheel 85cc machine is Billy Askew. During the Covid lockdown Askew opted to move up to the Big Wheel and was an instant hit finishing second in the Michelin MX Nationals Championship and will have his eyes firmly set on the title for 2021. Also during the 2021 season the team and Billy will be travelling Europe as they compete in the European 85cc Championship.

Finally, 2019 British 65cc Champion, Reece Jones will be lining up on the Small Wheel 85cc machine once again and challenging for National honours as he returns from a broken leg earlier in the year.

For 2021 SJP Moto will also be introducing a new Satellite team under the name of SJP Moto R2R KTM with the support of Arm Pump product Relax2Race.

The three-rider line up will feature James Barker and Hudson Roper on the 125cc KTM machine while Multi time British Girls National Champion Lucy Barker will be contesting on the Big Wheel 85. All three riders will be competing in the Michelin MX Nationals.