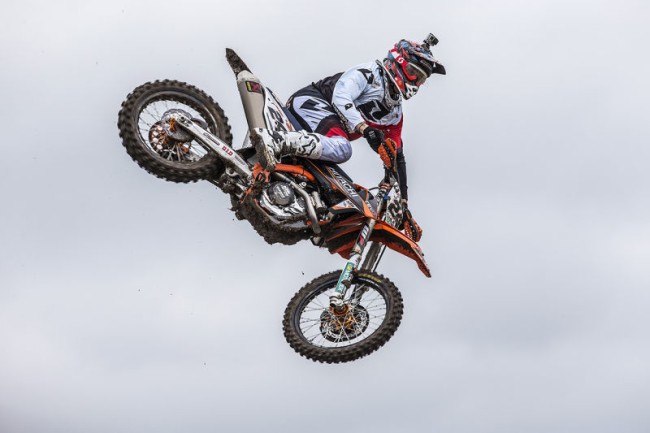 Hitachi Construction Machinery Revo KTM had reason for celebration again at the seventeenth round of eighteen in the 2015 FIM Motocross World Championship as Shaun Simpson posted a ‘2-2’ scorecard in the motos for the Grand Prix of Mexico at Leon and finished second overall for his third podium result from the last four rounds of MXGP.

For the third Grand Prix in a row Simpson was able to enjoy a 2016 450SX-F direct from the KTM factory with excellent technical support from the works team. The lighter and more nimble motorcycle was an apt tool for the Scot to ride to a decent third spot in a dry qualification heat on Saturday afternoon after previously setting the second fastest lap-times in both practice sessions.

On Sunday the skies above Leon were changeable but the damage to the circuit had been done with excessive rain Saturday night that left zones of the flat facility flooded, and the track altered once more. The feature-laden layout became a perilous line of deep ruts, sticky mud and slick, slippery areas.

In the first moto Simpson made a bright start to slot into third place behind Glenn Coldenhoff and Romain Febvre. The Scot briefly lost control and crashed but managed to remount without conceding a position. The rear wheel of Febvre was further in the distance and Simpson concentrated on managing his pace, maintaining the bike and staying on two wheels. When Coldenhoff fell-off he moved into second place but could do little about the pace of Febvre. The ranking of runner-up represented his seventh top three result of the season.

The sun was doing its best to cook and harden the soil by the second moto and some decent reparation work by the Youthstream track crew led to a bevy of lines and choice for the GP stars. It was a stage that Simpson relished and despite a poor start that saw him among the last entering the first corner, he rallied from sixth to win an intense and entertaining dispute for second between five riders. He passed factory representatives in the forms of Max Nagl, Glenn Coldenhoff, Jeremy Van Horebeek and the HRC boys of Evgeny Bobryshev and Gautier Paulin to again tread the podium steps.

Simpson is fourth in the MXGP standings and a hefty 39 points in front of Max Nagl with a maximum of 50 left to win next week in the USA. The second important event from four for Hitachi Construction Machinery Revo KTM in the coming four weeks will take place next weekend with the Monster Energy U.S. Grand Prix signifying the end of the longest MXGP campaign on record. Simpson will be looking to confirm his best result in the premier class standings and then immediately focus on the 2015 Motocross of Nations at Ernee in France before the closing round of the Maxxis British Championship at the Fatcat circuit in Doncaster.

Shaun Simpson:
“It has been a good weekend and I would like to back-up what Romain [Febvre, GP winner] said in that the track is how we expect a GP track to be every time. I have some work to do on my starts because I struggled today in both races. I wasn’t stressed though in the second moto because I knew there were places on the track to pass. I felt smooth and comfortable. Overall it is nice to show that I can make good speed and get back up on the podium, even when it is not in the sand. I felt great on the bike this weekend.”