Simpson talks about a tough USGP 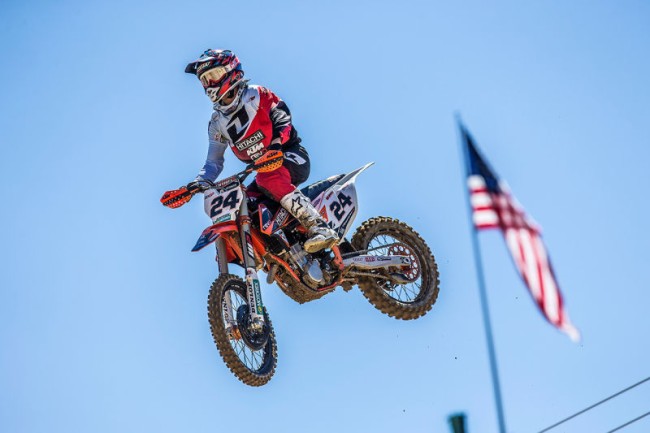 Fourth in the world. Hitachi Construction Machinery Revo KTM ended the 2015 FIM Grand Prix series at Glen Helen with Shaun Simpson sadly sustaining his first ‘DNF’ of the season due to a crash in the opening turn of the first race but the Scot still hobbled away with a top four result in the standings to place the team in the upper echelons of the sport and among the factory squads. With 481 points at the eighteenth and last round of the FIM Motocross World Championship Simpson has set a personal best both for himself and the squad after a tremendous campaign that also involved two Grand Prix wins and a successful defence of his British title.

Sunshine beat down on Glen Helen and the paddock was full of optimism for the final MXGP outing of the year, Simpson was however undone in the opening seconds of the Grand Prix. He caught the back wheel of Gautier Paulin and crashed heading into the first, banked turn where he was hit by several other riders.

The 27 year old was fortunate to escape more serous injury but suffered a dead left leg and haematoma that required a visit to the medical centre and counted him out of the second moto. With Max Nagl also not completing the race distance Shaun secured fourth overall for 2015 and is hopeful of a recovery this week.

Several more important events lie ahead for the team and for ‘24’. The Motocross of Nations will see Simpson lead Team Great Britain next weekend at Ernee in France for one of the most eagerly awaited events on the international motocross calendar. A week later Simpson will compete at the final round of the Maxxis British Championship and attempt to end 2015 unbeaten in all eight fixtures of the national series; a fantastic feat. Finally the Hitachi colours will make an appearance at the Weston Beach race where Simpson will try to defend the victory he claimed last year on the famous coastline.

Shaun Simpson:
“Overall it was not a nice way to end the year. I had a perfect season going in terms of points. I’m a bit disappointed but getting fourth in the championship tied up was the main goal this weekend. I’m sure with some treatment this week I will be back on the startline next week ready to give 100% for Team GB.”

Roger Magee:
“Fourth place in the world and leading KTM. The best British KTM rider and team in the national series and two Grands Prix wins: it has been a fantastic season for us and after so many races and so much effort this season it is a big achievement for Shaun and the team. I know he would not have wanted to finish the MXGP like this but it pales into comparison with what he has done since the start of 2015. I’d like to thank everybody that has helped us arrive to this status and our best position on both international and national stages. It would not have been possible without some key sponsors and assistance. We hope Shaun can be alright for the Nations and then closing the year out in the British.”