Simpson speaks about a difficult Hawkstone 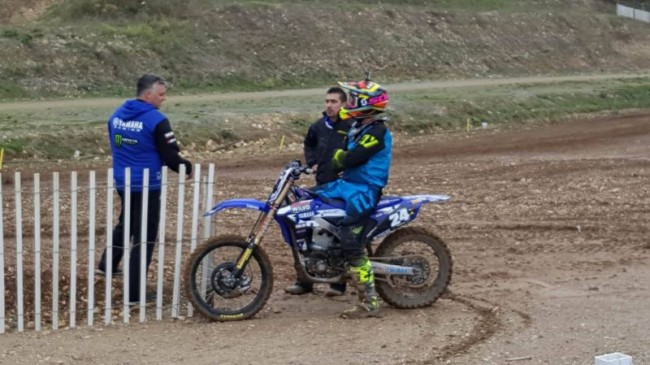 With the FIM Motocross World Championship just a whisker away Monster Energy Yamaha Factory Racing’s dynamic duo of Jeremy Van Horebeek and Romain Febvre are putting the final touches on their pre-season preparation putting their YZ450FM through its paces in the Italian International Motocross Championship. In contrast to the sand of Riola, which hosted round one of the three round series, round two took place yesterday on the rock-hard Roman clay of Malagrotta where both Yamaha riders landed on the podium.

The Italian International Motocross Championship is the first national series to incorporate the new FIM rule that replaces the traditional dirt start pad with a metal mesh. “I really like the new start line,” Van Horebeek said, “it makes the start the same for everyone, it works really well with my set up and for me it’s really good because good starts is something that I was missing last year.” The Belgian fired off the line in both races where he chased the most successful rider of the last decade, Antonio Cairoli, home for second place. “I had a good weekend,” he continued, “I felt good on my YZ450FM, I felt like I could keep up with Tony (Cairoli) but I spent too much time eating his roost to make a pass. Anyway, we finished really close and I am happy that I know my speed is there.”

Crashing is part and parcel of motorcycle racing and after his spill in Riola last weekend Febvre put the pain of a neck strain aside for a respectable third place finish. “In the first race I was feeling good” the Frenchman said, “I got a little bit of arm-pump and only finished fourth, but in the second race it was much better and I finished third so I was on the podium at the end of the day.”

Both riders will remain in Italy where they will continue to further refine their YZ450FM’s while training for the fast approaching MXGP season. Their next race will be at the final round of the Italian International Motocross Championship and it will take place next weekend 12th February, south of Milan at the ever-popular sand track ‘Ottobiano’.

Meanwhile, the Wilvo Yamaha Official MXGP squad crossed the English Channel where they had planned to make a dent in the results sheet at the Hawkstone International Motocross, which took place at the famed ‘Hawkstone Park’ sand circuit in Shrewsbury, England. Unfortunately, the weekend got off to a rough start with Arnaud Tonus withdrawing due to illness, and then Shaun Simpson was forced to pull out of the first race after losing a foot-peg in a bizarre first turn crash.

Battered and bruised, the gritty Scot went out for the second race where he pushed through the pain barrier for eighth, “it’s a bit of a shame really,” he said regarding the weekend, “I just wasn’t feeling it from the get-go. I crashed in the first turn and was run over, I thought I might be okay when the gate dropped so I went out for the second race but wasn’t feeling great and struggled to fight. I just ended up circulating, so I didn’t go out for the final race. I will need to take a few days to recover and try to get back to 100% before I can give it everything I’ve got.”

A full week of rest and recovery for both riders should leave them in top shape for their next race which will take place next weekend, 12th February, at La Capelle-Marival, France.