Simpson on the podium in France 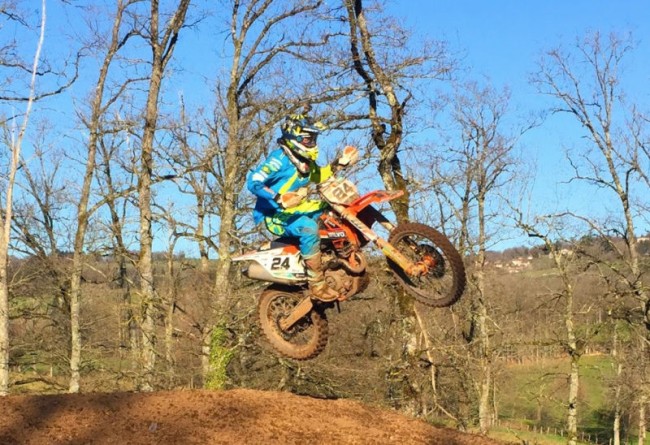 After his two previous pre-season overall victories Simpson headed down to the beautiful Lacapelle Marival track in mid France for his final outing before the GP season kicks off in earnest. After last year’s disappointment of losing Nicholls at the same meeting just one week before the season opener there was more than a little twitchiness in the camp as the racing started.

Race 1:
After qualifying fastest and therefore having first gate pick Simpson didn’t make best of it and instead was caught out by the quick drop of the gate, only rounding the first turn in 10th. After initially making swift progress through the field he suddenly cross rutted and hit the deck, dropping him back down outside the top ten but he put the hammer down to claw his way back to 4th at the finish.

Race 2:
Determined to make amends for his bad start in race 1, Simpson blasted out of the gate and was in a good position as he started to make the first turn but a rider inside him decided to go straight on and caused carnage as a number of riders, including Simpson were wiped out.
After picking himself up at the back he set about salvaging what he could from the race but after dropping the bike twice more he was left down in 11th at the flag.

Race 3:
Simpson made a pretty decent start and was right amongst it in 4th but he came together with Karro and was left in the dirt again. After restarting in 11th he set a rapid pace as he blasted past the opposition and by three quarter distance he was up to 2nd. Leader, Paturel was setting a fast pace and it was not so easy to close the gap but Simpson upped his pace as the race neared its climax and as they entered the penultimate corner Simpson went for the win, only to get a huge swap on, which he was lucky to save. Although disappointed not to take the win his second place was enough to give him third overall in MX1 for his third podium in as many weeks.

Shaun Simpson: “It was a trying day and a bummer to have so many crashes but it was handy to get all those mistakes and misjudgments out of the way. My speed was great and I felt good on the bike after some changes we made in the morning. Anyway, feet firmly back on the ground, the main work is next week in Qatar.”

Team manager, Steve Turner: “I was understandably nervous watching the racing today after losing Jake here last year and I had my heart in my mouth at certain times throughout the day, especially when Shaun was wiped out on the second race start but once again, despite a string of small crashes he still managed to get the job done and managed to get on the box again. All in all he’s had a tremendous few weeks and is going to Qatar in great shape.”