Simpson on his double win at Hawkstone 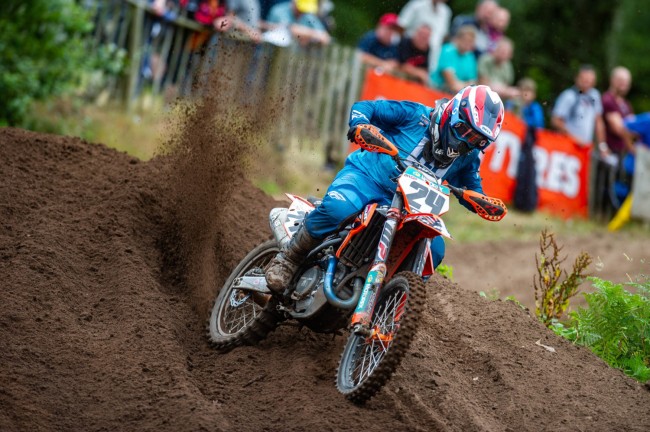 Round six of the ACU Maxxis British Championship headed to the famous Hawkstone Park for round six. Shaun Simpson and Joel Rizzi where both in action, read below to find out how they got on.

Joel headed into Hawkstone Park full of confidence after his successful weekend in Italy the weekend before. In qualifying Joel set the pace going 4.6 seconds faster than the rest of the field. Race one Joel had a good start aboard the KTM 125 SX machine and was placed third for the opening two laps, early lap three Joel took the lead and pulled away giving him a 10 second gap at the finish.

Race two saw Joel with another good start in fourth around the first couple of corners, getting into his rhythm Joel started to make his way to the front and was challenging Ike Carter for the lead, an uncharacteristic mistake from Joel caused to loose the front end in a turn and drop back to tenth at the halfway mark. Joel remounted and pushed back through the pack to finish fourth in the second race giving him third overall on the day and maintaining a 24 point lead in the series with two rounds left.

Shaun headed into Hawkstone Park looking to prove a point after the disappointment of Desertmartin. Qualifying saw Shaun take pole position by 1.5 seconds over Elliott Banks-Browne and 1.9 seconds over title rival Tommy Searle. A good jump of the gate in race one Shaun found himself in second place around the first corner behind the 151 of Harri Kullas. Shaun soon passed Kullas early on the second lap and started to pull away running lap times three-seconds quicker than his competition. Shaun took a convincing win with a 38 seconds gap to second at the flag.

Race two Shaun had another good start making his way into the lead early on. Setting the fastest lap time by just over four-seconds Shaun found himself with another healthy gap over second placed Tommy Searle. Shaun took the win by 25 seconds and rounded off the perfect day for the RFX KTM powered by PAR Homes team.

“I headed into Hawkstone Park feeling confident, I’ve been riding well recently and with the couple weeks off I’ve been able to concentrate on myself and get rid of any niggling injuries like my hand and stuff. I’ve got good vibes from Hawkstone even though I dislocated my shoulder there at the International. Pulling into the paddock I was quietly confident that I could get the job done. I went out in qualifying with a job to do and I stamped my authority on that which is definitely a confidence booster. I had two good starts and just charged every lap of both races to prove a point. I was definitely the fastest guy around there yesterday by quite a margin and it was a great confidence for me going into the Grand Prix’s and Lommel coming up. The nations selection is definitely on everybody’s mind as well, I’m more than confident this year that I want to be part of that and I can’t of done myself any harm there yesterday showing that I’m one of the fastest guys in the UK. All in all it was a good day and we are leaving with smiles on our faces” – Shaun Simpson