Simpson not happy with Lommel performance 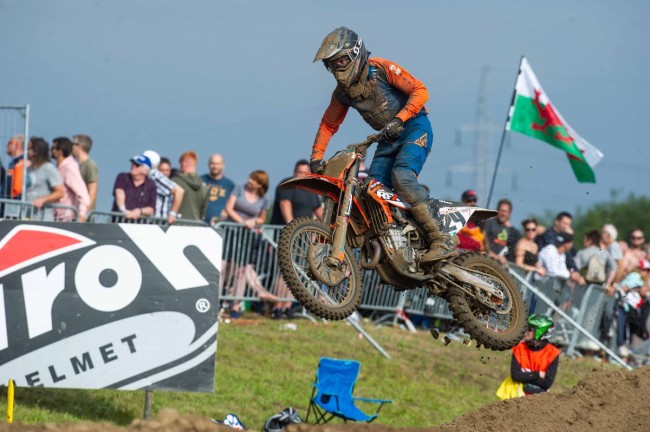 Lommel hosted round 14 of the MXGP World Championship, both Shaun Simpson and Joel Rizzi were in action read below to see how they got on in the deep sand.

Posting the fastest time in free practice aboard the KTM 125 SX machine Joel set up his weekend in the best possible way. Gelling with the track early on Joel posted the third fastest time in his qualifying group leaving him with a good gate pick for his two races over the weekend.

Race one Joel took the holeshot and lead for most part of the opening lap. Joel was passed by series leader Mattia Guadagnini in lap two and settled into second place. On lap seven Joel had a small crash and with such close racing Joel dropped back to 12th. Joel maintained 12th and finished strong in the first race of the weekend. Race two Joel had another fantastic start placing in third around the first corner, Joel lost a position early on and settled into fourth place. At the halfway mark Joel started to struggle with the physically demanding track and started to drop back. Joel dropped back to eighth but managed to dig deep and make a pass for seventh on the last lap giving him 10th overall on the weekend.

It was a tough weekend for Shaun Simpson in Lommel, posting some fast times throughout the weekend gave Shaun and the team some positives to take away for the weekend. A distinct lack of energy left Shaun battling against the odds heading into this weekend’s racing. Shaun is heading to the doctor this week for blood test’s to determine his lack of energy.

” This weekend promised a lot and everyone has a lot of expectation for me around Lommel, myself included. I really thought that this weekend I might be able to spark some brilliance but for whatever reason that didn’t happen. Saturday wasn’t too bad, the timed qualifying session was good, I got fourth. I didn’t feel that I got myself into much rhythm in the race and struggled in the last few laps after running out of tear offs to come home in eighth.  Starts were going to be key on sunday, but I feel that I’ve done enough prep to warrant being strong at the end of the moto. To be honest from the get go on Sunday I didn’t feel like I had it, I felt like I was struggling with the bike, the track, myself and ended up twelfth in the first moto and feeling pretty exhausted after 35 minutes.  I didn’t feel like I had a lot left in the tank for the second moto and after ten minutes into the  second one it was much the same story just riding around like I’ve never rode sand before in my life.  We need to go back to basics and the drawing board to figure out what’s happening. I’m going to get some checks done on myself and see how that’s all looking. I physically or mentally can’t comprehend how I’ve managed to ride so bad yesterday. We just need to make sure this week that we figure out what is going on and come into Foxhills feeling in a better place and try and go for the win there.” – Shaun Simpson