Simpson makes it two wins in a row! 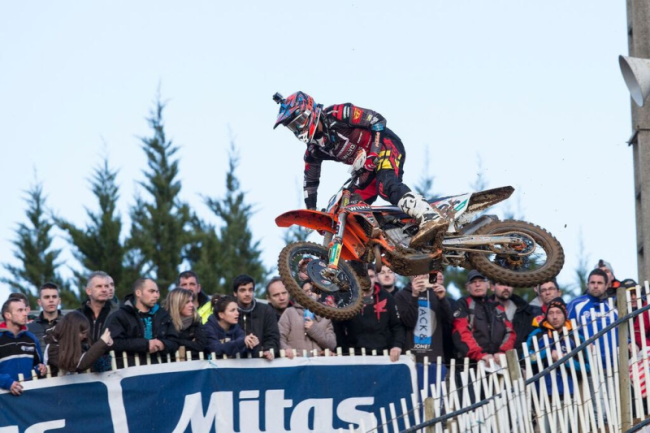 The action was hot on the track and off for Simpson as his trusty camper decided to burst into flames on his way down to Valence on Friday evening. Luckily he had the correct fire extinguisher onboard and was able to save the vehicle from being completely destroyed. The mechanics were quickly on hand with a replacement van so he could continue his journey down to what proved to be another successful weekend.

Simpson, Strijbos & Desalle exchanged fastest laps throughout the session with Strijbos coming out on top from Desalle and Simpson.

Simpson made a great jump but the gate bounced up and as he caught it with his wheel it cost him a split second which meant he only rounded the first turn in sixth. He quickly made it through to fourth but by the time he passed Karro for third the front two of Desalle and Srijbos were 8 seconds into the distance. After letting the gap to Strijbos go out to 10 seconds by the mid point of the race Simpson suddenly started to take big chunks out of it and entered the last lap just a couple of seconds down, however it was just enough for Strijbos to hang onto the position and Simpson had to settle for third.

Simpson and Desalle went into turn one side by side but Desalle had the better drive out of the corner and took the lead. Simpson hounded the first race winner for a number of laps but a small mistake whilst trying to make a pass cost him a couple of seconds and he lost the tow. Try as he might he couldn’t get the deficit back down and had to be content with second at the finish.

The last race of the day was a mixed race with the best MX2 and MX1 riders going head to head. Simpson made a blinder of a start and rocketed into the lead. Desalle was on his tail with Townley and Herlings in pursuit. Desalle was pushing hard but as they hit the take off on the finish line jump side by side Desalle seemed to get whisky throttle on the take off, launching him high into the air and crashing heavily in the corner. Simpson looked smooth and relaxed as he continued to lead but behind him Herlings had found a way past Townley and was closing in. With two laps left he was right on the leader but Simpson held his advantage throughout the lap and he looked odds on to maintain it to the finish, however as he rounded the tight right hander to start the final lap he got hooked up in the inside rut and Herlings shot past on the outside to take the win and the MX2 overall with Simpson taking the MX1 top spot for the second time in a week.

A happy Shaun Simpson commented afterwards, “Another solid weekend in our preparation for the start of the MXGP season. It was great to get another win under our belt and really start to feel comfortable in race conditions. Despite the rain and forecast the track turned out to be excellent and it was a pleasure to be part of the final Valence International MX. Keep the ball rolling into next week at Lacapelle Marival and ultimately Qatar for the first MXGP where the season really begins.”

Team Manager Steve Turner added, “Shaun looked superb again today and made it two overall wins in a row, after last week’s success at Hawkstone. He looks so comfortable and smooth on the bike and is in a good place mentally. We’re all working hard to make everything spot on for him and it’s working so far.”