Simpson battered and bruised after crash 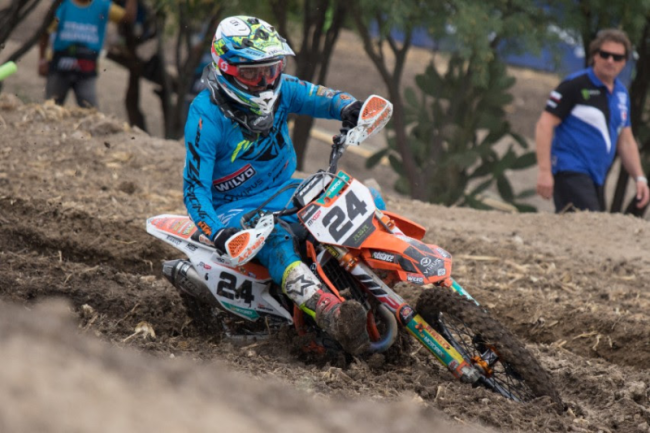 The Wilvo Virus Performance KTM team battled adversity after travelling to Leon, Mexico, for the fifth fixture on the FIM Motocross World Championship calendar. Shaun Simpson had high hopes entering the event, as he had a pair of runner-up positions there late last year, but some unfortunate issues out of his control stopped him from achieving the expected results.

A mediocre start in the MXGP qualifying heat made life difficult for Simpson, as he had to work his way forward from the middle of the pack. After swapping positions with those around him on multiple occasions, he finished tenth after advancing as high as eighth at the halfway mark. The result set him up reasonably well for the two motos on Sunday, as the start at Leon is quite fair in comparison to some of the other tracks.

The MXGP races regularly turn into a brawl, as the level of competition is so high this year. Simpson again found that after starting mid-pack in the first encounter, as he was right in the thick of a freight train. ‘24’ remained composed whilst battling it out with those around him, however, and used his experience to move up two spots towards the end of the moto. An eight place meant he was still one of only four riders to finish in the top ten in every moto up until that point.

Simpson got off to a better start in the second MXGP moto, as he pushed forward in the early stages and made a move on eight-time world champion Antonio Cairoli to take seventh. Simpson unfortunately crashed in one of the extremely rutted corners after a few laps, however, and, as he attempted to retrieve his machine, was hit by another rider at full speed. Battered and bruised, Simpson was unable to continue.

The work that he had already done saw him collect four points, which helped him garner thirteenth place overall. With five rounds complete, ‘24’ now sits eighth in the MXGP standings and just a couple of points behind seventh.

Shaun Simpson: “It was tough. This track sort of lends itself to being a bit ropey and a bit sketchy. The ruts were really, really crusty and they had watered a few bits, so it was pretty sketchy. I went down on my own [in the second moto], got a bit disorientated as I was getting back up and as I turned to run back to my bike Lupino was fully committed to the corner and drilled right into me. Both wrists have taken quite a hit, my right bicep has got a hematoma on it and my right leg as well. I’m definitely thankful to be in one bit, that’s for sure.”

Steve Turner: “It was a tough weekend. The first race wasn’t so bad, but the second race was going really well. He had better lines and was moving forward, but crashed. Lupino was railing it around the berm and smashed straight into him as he was getting up. Both of them ended up in a heap and battered, but are okay – that is the main thing. When you first see all the medics going towards them, you fear the worst. We’ll be okay for next weekend, that’s for sure.”