Simpson back for MXGP of Sweden this weekend – but Tonus out! 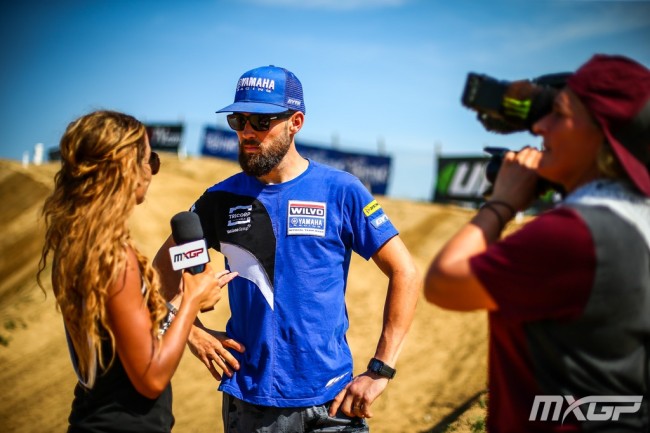 Monster Energy Yamaha Factory Racing’s Romain Febvre and Jeremy Van Horebeek are taking some amazing memories into the sixteenth round of the FIM Motocross World Championship, that will take place on the marble-like clay of Uddevalla, Sweden, this weekend. Both YZ450FM riders topped the podium at the tracks most recent round of MXGP – which took place back in 2015 – with Febvre dominating the Grand Prix with a 1-1 result for his fourth consecutive overall victory of that season, while Van Horebeek went 2-5 for second place.

Romain Febvre has been edging closer and closer to the podium, and it is time the former world champ made an appearance. The Frenchman, who is currently sixth place in the MXGP Championship Standings, has finished fourth overall three times over the last four rounds. He’s frustrated and eager to make his return to ‘the box’, which may just come this weekend as he proved strong on the slick and challenging surface back in 2015 where he went unbeaten for the overall.

Jeremy Van Horebeek’s first-turn crash in Russia – at round ten of the FIM Motocross World Championship – broke his finger and his rhythm. The Belgian has been fighting hard to recoil the race-pace since his return to the championship, which was at round twelve – the MXGP of Portugal. After standing on the second step of the podium at Uddevalla’s most recent Grand Prix – back in 2015 – ‘The Jerre’ will be lining up with fond memories of which he hopes to replicate, if not better.

Wilvo Yamaha Official MXGP’s Shaun Simpson will be making his eagerly awaited return to racing. Unfortunately, his teammate Arnaud Tonus will not be racing after breaking a rib in the final race of the Swiss Grand Prix. The Scot, Simpson, is looking forward to lining up, where he will race the all-new 2018 YZ450F for – his – first time at Grand Prix level this weekend.

Simpson lined up on the new bike yesterday – Tuesday 15th of August – at the Belgian Championship in the Keiheuvel, Balen, where he put in a pretty solid performance against a stacked line-up of sand specialists. The twenty-nine-year-old admitted he was a little ring-rusty out there, but still managed to come home in fourth overall.

The track in Uddevalla dates back to 1958 where the circuit, that has a hard pack surface with loose pebble-like topsoil, and tends to develop loads of jagged edged bumps, has hosted the Swedish round of the FIM Motocross World Championship on twenty-two occasions. From the year 2000 through to 2015, Uddevalla was on the calendar fifteen consecutive times, and is a familiar place for the majority of the riders in the premier class. All three of Yamaha’s MXGP stars have experienced some sort of success at the venue with Romain Febvre and Jeremy Van Horebeek standing on the top of the box at the most recent visit, while Shaun Simpson was third in the opening race in 2015, but had a small crash in Race 2 and finished sixth overall.

Arnaud Tonus is expected to make his return to racing at the Monster Energy MXGP of The USA which will take place on the first weekend of September, 2nd and 3rd, in Jacksonville, Florida.

Romain Febvre
6th MXGP Championship Standings, 401-points
“I did really good in Uddevalla last time we went there, but they may have done something to the track since then, and up until now, I haven’t seen it. Maybe they have changed something because I remember last time we went there they had changed the layout of the track and the dirt was different to the year before. I hope that they will change a few things compared to two-years ago. I felt good last weekend in Switzerland. Things seem to be getting better for me so I hope to get some good results this weekend and finally finish the day on the podium.”

Jeremy Van Horebeek
8th MXGP Championship Standings, 348-points
“It’s a good track. I like it there. I think it will be good, I have been struggling a bit lately with some things but step by step it has been getting better. I will see this weekend if it will be better again. I hope to be inside the top-five this weekend, or back on the podium. That would be great because it has been tough to break into the top five recently.”

“I feel like I am in good shape off the bike at the moment, but on the bike I’ve been wanting to take a bit more time than I did heading into my original ‘come-back’ in Ottobiano back in June. This time I’ve tried to get some laps under my belt before lining up at the GP, so I can continue to develop the 2018 YZ450F. We are wanting to work hard on getting the bike right over the next few weeks so we have some real good data for the winter time. Race data, not just ‘riding data’. My main goal is to come out swinging in Assen because I know I can ride well there, but for this weekend my goal is to have some time on the bike and make it through the weekend. I will still be trying my hardest but I don’t want to set any goals that may be unachievable. “