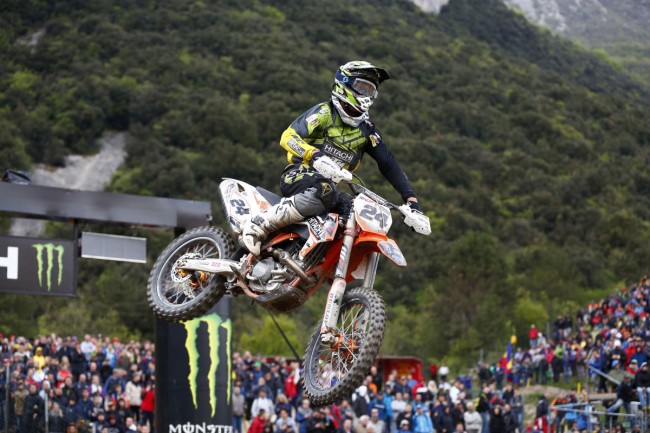 The Grand Prix of Trentino at a packed Pietramurata circuit meant a weekend of survival for the MXGP and MX2 line-ups of the Hitachi Construction Machinery Revo KTM UK squad.  Shaun Simpson took his 450SX-F to twelfth overall in the premier class and continues his quiet but steady start to 2015 while Petar Petrov and Ben Watson walked away from a rough and deceptive hard-pack terrain with points and fourteenth and twentieth in MX2.

The British Champion had a strange day on Saturday. A heavy crash at the end of Free Practice saw him lucky to escape injury and Simpson struggled for a fast lap in Timed Practice. During the Qualification Heat however he spotted two lines on the track that gained him precious tenths of a second on the leading pack and was nearing the top five by the closing stages of the twenty-minute sprint. A decent seventh position meant a good choice in the gate for Sunday motos.

In the first race Simpson made a reasonable start – a top five slot was nigh-on essential for a realistic shot at the front-running group due to the windy and tight nature of the layout – and the Scot missed his chance. ‘24’ was not riding comfortably and summed up his experience of the day afterwards by saying he failed to find his “groove”. The terrain was a drier and bumpier prospect compared to Saturday and the lines simply wouldn’t come. He fended off David Philippaerts for twelfth in Moto1 and then started worse (but pointed better) with a tenth in Moto2.

In MX2 and using the 250SX-F Petar Petrov posted a classification of fourteenth and slipped inside the top fifteen on both occasions with a 14-15 tally; the Bulgarian was expecting better. Pietramurata was a learning experience for the kind of pace Grand Prix riders run across such treacherous soil and Ben Watson’s best effort led to a seventeenth in the first moto.

Simpson is now eleventh in the standings of the premier class while Petrov and Watson inhabit eleventh and twenty-third respectively in MX2. Round five of the MXGP FIM Motocross World Championship takes place next weekend with the Grand Prix of Europe venturing into the Valkenswaard sand in the Netherlands. It will be the first sandy race for the paddock since the visit to Lommel in Belgium last August.

Shaun Simpson:
“It’s a case of finding a totally different track today. Yesterday I felt great, could reel in those front runners and the bike set-up worked really well. Today my feeling was very different and I think all the races and the lack of track prep meant that there was less grip. I couldn’t find my groove; no traction with the rear tyre. I tried a few things for the second race but there wasn’t too much improvement. I struggled to pass and maybe was not as aggressive as some of the other guys early on. I was lucky to finish tenth in the second one but I’ll take it. It wasn’t a disastrous day and especially compared with the nine points in Argentina. We moved up a slot in the championship and I’m looking forward to some tracks that will be a bit more to my liking.”

Ben Watson:
“The weekend wasn’t amazing; some ups and downs. Qualification was pretty good but I had a mid-pack start in the first moto. I got a good few laps in and OK pace for sixteenth. I was away badly in the second moto and got boxed in around the first turn. The track was very technical and probably the roughest and most difficult so far. I felt on the edge in the last race and was not too comfortable on the bike. We struggled with set-up but came away safe with some more points.”