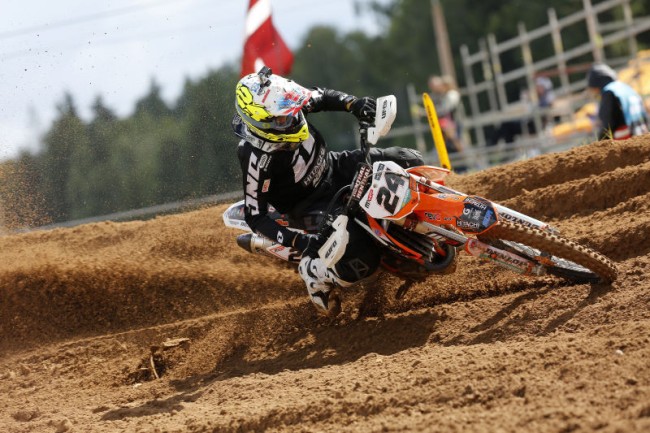 The mud of Kegums was liberally coated for the Grand Prix of Latvia and at the twelfth round of the 2015 FIM Motocross World Championship Hitachi Construction Machinery Revo KTM’s Shaun Simpson ploughed through the wet bumps and ruts to take eleventh position overall on his 450SX-F. Ben Watson guided his 250SX-F to a personal best ninth place with moto results of 8-14.

Heavy showers battered the 2014 Motocross of Nations circuit on Friday and then through Sunday morning creating a slower and bumpier prospect through the shallow sand. The hard ground underneath the soft stuff was slick and presented a difficult mix between the fine surface and some punishing edges. Riders debated on tyre choice and also suspension settings.

Simpson rolled his KTM into the gate in ninth position Sunday morning. The Scot made a hash of the start and exited the line in last place but somehow turned tight, found some gaps and emerged in eighth on the first lap! Shaun started a charge at the front of the second group and in the tussle for fifth position. He was a little too close to Dean Ferris coming out of the right turn before the pitlane and when the Australian made a small mistake Simpson could not avoid his rear wheel and crashed. Back down to twelfth the 27 year old regrouped and came back into the moto but a potential top ten finish was ruined after he collided with Evgeny Bobryshev on the last lap. Picking himself up once again Shaun made it to the line in sixteenth.

Hopes of a calmer and far better second moto were not helped with a technical problem that meant a hectic break between the races but at the second time of asking ‘24’ started well and after being passed by factory riders Gautier Paulin and Kevin Strijbos endured a lonely ride to seventh place, neither relishing the track or finding a decent feeling.

In MX2 Watson, in his first Grand Prix at Kegums, rode his best race of the season yet and was as high as sixth after a great start in the first moto. From lap five of seventeen he held an assured seventh position and was only just denied the ranking by a flying Tim Gajser, winner of the last three Grands Prix, who was barrelling back through the pack after falling before the first corner. The second race was a bit busier for the rookie. He made a top twenty start and had a good scrap with Samuele Bernardini from which he emerged victorious for fourteenth. 20 points was his highest haul of 2015 and he has now marked his card in the last eight motos.

In the MXGP bigger picture Simpson has 276 points, which keeps him seventh in the FIM World Championship standings. Watson is twentieth. In the seventh outing of the EMX250 European Championship James Cottrell was 29th.

Hitachi Construction Machinery Revo KTM UK now head back to the UK where they will prepare for the sixth round of eight in the Maxxis British Championship at the Foxhill circuit near Swindon. Simpson has yet to be defeated in the first events of the premier class where he is hoping to successfully defend his title. Watson will be looking to return to the podium of the MX2 category at the former Grand Prix venue.

The team will then start the trek across central Europe and to Loket where they will tackle the hard-pack for the Grand Prix of Czech Republic.

Shaun Simpson:
“If we never come back to this circuit I won’t be sad! I just struggled to gel with the track; it has been a long weekend. I was trying too hard in the first moto and couldn’t avoid Ferris and then also Bobryshev when he landed short. I thought I’d hurt my hand actually but with a couple of painkillers it was fine. The second moto was better but I’m stumped for many positives from this race. I suppose I’m still seventh in the championship and limited the damage with a solid second moto but we faced some tough odds at this GP and will just have to move on.”

Ben Watson:
“It is about time that it all came together. I had better starts today. In the first race I was top six and stayed there for a good while. I lost two places, one on the last lap to Gajser and I didn’t even really register that; when he came past I thought ‘oh, there’s Gajser’. If this was the first round then I would have been expecting people to pass me straight away but I ran there in Qatar and I did it yesterday in the qualifying race. I know I can run in these positions and today I managed to do it a bit longer than normal. I’m not sure if it is anything to do with the sand – because I prefer it to hard-pack – but it has been a lot better weekend.”