Simpson and Sterry shine at Hawkstone 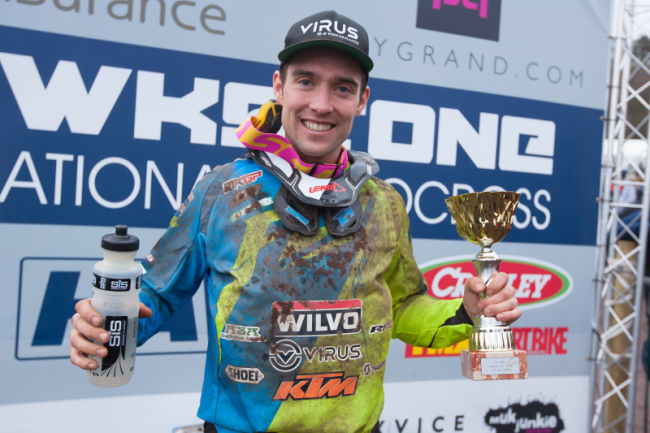 It was an early start to the season as the team descended on Hawkstone Park for their first taste of competitive racing of the season. The weather on Saturday was atrocious and although it improved on Sunday it still meant the riders were faced with pretty sloppy conditions. Despite the weather, the fans turned out in droves and there was a buzz of excitement and expectation as they lined the perimeter waiting for the action to begin.

Qualifying:
Sterry was first out in MX2 and looked strong, fit and fast as he posted 4th quickest. Simpson, making his debut for the team showed he meant business by taking pole position.

MX2 Race 1.
Sterry made a good a start in 4th and looked impressive as he quickly moved through to second but a mistake coming into the bomb-hole cost him the position and he was back down to third. He got back onto the tail of Watson but made a mistake trying to pass him and lost ground and then clipped a back-marker over a jump and ended up going off the track, dropping him down to sixth at the finish.

MX1 Race 1.
Simpson took the holeshot but stalled it in the second turn, dropping him down outside the top twenty. He stormed through the field and as the race entered the final quarter he started to post lap times 4 seconds faster than the rest in his quest to progress as far as possible. With two laps to go he was up to third and on the back of Brad Anderson but the tough Geordie wasn’t going to give up 2nd without a fight and made himself as wide as possible. Simpson made a few attempts to pass but sensibly decided to settle for third rather than risk crashing.

Sterry made decent start in 6th but struggled a little with the bike set-up as the track deteriorated and was hard pressed to improve his position. After swapping a couple of places during the race by the end he had to be happy with 7th.

MX1 – Race 2.
Simpson made a reasonable start in 4th before making light work of the competition to move behind race one winner, Desalle. After tailing him for a few laps he made his move and blasted into the lead. Once there he looked decidedly comfortable as he build a commanding lead and when Townley stick a pass on Desalle on the last lap it meant Simpson took the overall much to the delight of his legions of fans and his new team.

Both riders were away in the top ten with Sterry a couple of places ahead of his teammate but Simpson was on the move and quickly moved through into the top five. Sterry was in 7th mid-race but tipped it over in a corner, losing a couple of places and eventually coming home in 9th. At the front, Anstie and Herlings were building a lead after getting way ahead of the chasing MX1 boys. Simpson made a couple a great passes to move into second but Herlings was too far ahead for him to have a chance of catching and instead he found himself having to fend off the advances of a charging Strijbos to take a well deserved second place to end a fantastic day.

A happy Simpson said afterwards, “I had an excellent day, I poled qualifying from [Clement] Desalle and had a good start in the first moto and took the holeshot but then stalled it in the second corner like a total goon. I tried to get the bike started again and eventually got going in eighteenth or nineteenth and worked my way up to fifth and passed Townley and Strijbos to get up behind Brad Anderson but by then my roll-offs and helmet were totally clogged. I didn’t manage to get past Anderson with three laps to go so I thought third would be better than binning it. In the second race I got out behind Desalle and felt like I was in control of his pace. I could follow and was waiting for a mistake that didn’t come so I put a pounce on with three laps to go and managed to win. Townley also passed him, which meant I got the overall. It was a smart first race and then a good second one to win the event, so I was happy. Everyone did a great job within the team and I’m really happy with how everything went. It was a good payback for all the hard work we’ve done in training and testing. It was also great to see so many fans and some of the Simpson Army already out in force. A good day all-round.”

Adam Sterry commented, “It was nice to get back racing and get the first race arm pump out of the way. I expected the track to be worse than it was but it ended up being really technical and difficult. I was happy with how I rode but had bad luck with back markers in the first race. We have a few things to test and improve on the bikinied then before we know it we’ll be in Qatar.”

Team Manager, Steve Turner added, “Fantastic riding from Shaun, it was great to see him take the win in front of a bumper crowd. There were some top riders here and he showed he’s afraid of no-one. Adam looked great in qualifying and most of the first race but a combination of mistakes and a few set-up issues meant he didn’t get the results he was looking for. The team has worked extremely hard lately to give the riders the tools to do the job and I know Shaun and Adam really appreciate the hard work and dedication from the mechanics in particular.”