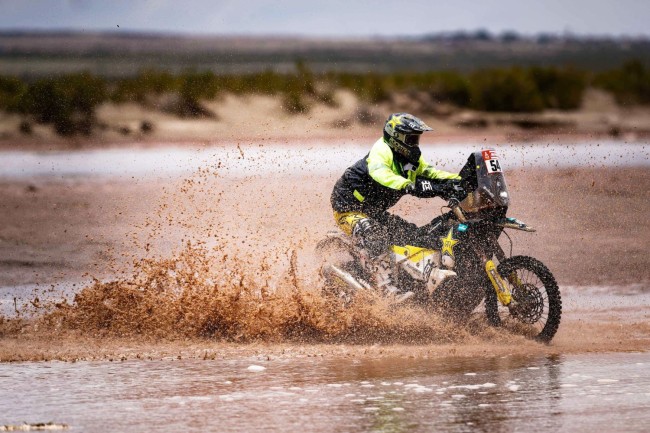 PR- Rockstar Energy Husqvarna Factory Racing’s Andrew Short has enjoyed his best performance to date on the 40th edition of the Dakar Rally, ending stage eight in 17th position. With it the US racer, who is competing in his first ever Dakar Rally, moves closer to the top 20 in the provisional overall standings. Dealing with a minor technical issue, Pablo Quintanilla is currently 12th in the overall standings.

Bringing competitors from Uyuni to Tupiza, Sunday’s second part of the two-day marathon stage was as long as it was demanding. Taking place in wet and cold conditions, it was another test for racers’ physical strength and mental stamina. Putting in a strong performance under difficult conditions, Andrew Short wrapped up the stage 22 minutes behind the provisional winner. Andrew is currently 23rd in the rally’s provisional overall standings.

For two-time Rally World Champion Pablo Quintanilla stage eight proved to be the most challenging so far in this year’s Dakar Rally. Running eighth in the provisional overall standings, Pablo suffered a minor technical issue on Sunday’s stage, which dropped him to an eventual 12th at the end of stage eight.

Due to extreme weather conditions and the increased risk of flooding and thunderstorms, Dakar Rally organisers have opted to cancel the stage nine timed special. Competitors are expected to ride in groups towards the Salta bivouac, where the race will resume normally on Tuesday.

Andrew Short: “These last two days have been really tough physically and mentally so I’m really happy we got this first marathons stage done. Yesterday I had a few small crashes in the mud and also stopped a few times to assist other riders. I’m really fast in the sand sections and I need to improve my speed in the faster tracks. Overall, today I had a good stage. I stopped and tried to help Pablo with the issue he had so I lost a bit of time there. For me the goal is to continue day-by-day. This race is really exhausting mentally and physically. We are all sore and beat up right now, but we need to focus on the stages to come.”

Pablo Quintanilla: “It was a disappointing day for me. I started really well. My goal was to push in order to make up some time to the leaders in the overall standings. 220km into the timed special I had an issue with my rear axle. I stopped and lost more than one-hour trying to get going again. This Dakar hasn’t been the best for me but I now focus on giving my best in the coming stages. We’ve worked hard all year for this race, so it’s disappointing for all the team for things like that to happen. It is what is and we’ll continue racing until the end. I still have the opportunity to get some good stage results while improving my speed and navigation, that’s my focus now.”