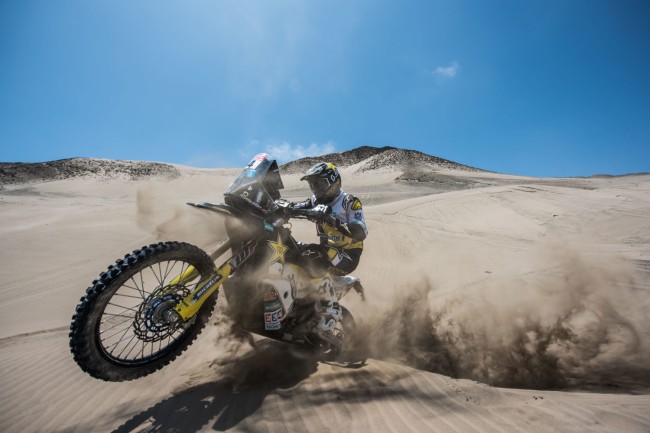 But the factory Husqvarna rider, speaking on Instagram, said he, “is fairly certain I broke my ankle in yesterday’s crash.” Short continued to the finish despite the pain and in typical Short style, congratulated Red Bull KTM rider Matthias Walkner on his win.

“I’m so happy to make it to the finish. That has been a very tough 14 days of racing. admitted Short in the Husky press release. “I hurt my ankle yesterday and only just made it to the finish. Today’s tracks were a lot smoother. There was a lot of dust everywhere and I think most people were taking things a little easier. I had some crashes over the course of the event but it hasn’t dampened my spirits. It’s always been a dream of mine to compete in the Dakar and it’s been interesting how I’ve handled the challenge.”

“We’ve had some adverse weather but that hasn’t been as bad as I had expected, I was ok at the altitude, too. I knew I would have some crashes, but to have four at high-speed is something I didn’t expect. The speed is something that has surprised me a little, I’m ok in the dunes and the off-piste stuff, but on some of the tracks you are riding at full throttle for what seems like hours. I thought my overall pace would be a little better, but I have come away from the event having learnt a lot and I know what I need to work on to improve. I’m looking forward to the rest of the season now and then hopefully I’ll be more prepared for the 2019 Dakar.”

Happy to have finished my first Dakar. 17th overall. Fairly certain I broke my ankle in yesterday’s crash at the beginning of the stage. Thank you for all the support and thank you to my amazing team @rockstarhusky @rockstarenergy @husqvarna1903 @flyracingusa Congrats to @matthias_walkner on 1st place!