Short and Quintanilla on a successful Dakar rally 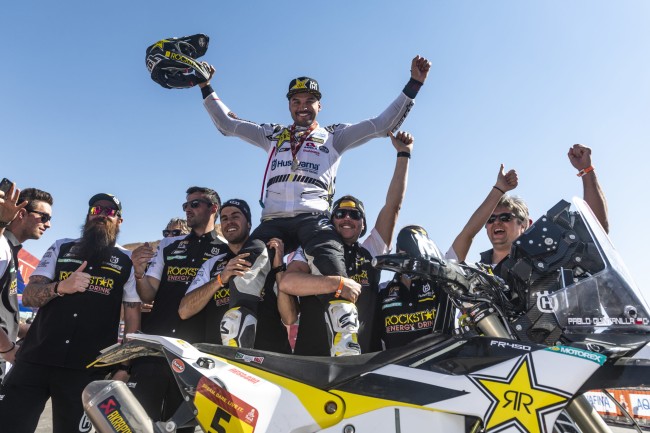 Rockstar Energy Husqvarna Factory Racing’s Pablo Quintanilla has claimed second overall at the 42nd edition of the Dakar Rally in Saudi Arabia. Earning his best result at the event by putting in an excellent performance over the entire 12 stages on his Husqvarna FR 450 Rally machine, Pablo bettered his third-place 2016 performance to award Husqvarna their highest ever event result to date. Teammate Andrew Short fought back from a tough first week to place 10th on the final stage, earning himself 10th overall in the race standings.

Winner of the penultimate stage, Pablo Quintanilla went into the 12th and final day of racing in Saudi Arabia with a 13-minute deficit on the race leader. Despite having the unenviable task of leading riders out into the final 374-kilometre special, he put in a superb ride from the front, opening the entire stage to ultimately finish fifth, just over three minutes down on the eventual stage winner. In claiming second, Quintanilla secured his best ever result at the Dakar, which, following the injury sustained at last year’s event, is a massive achievement. 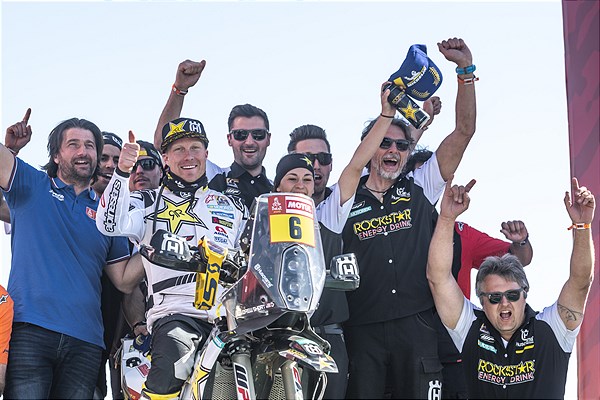 Andrew Short endured a tricky start to his 2020 Dakar Rally campaign – a crash on stage two that resulted in damaged navigational equipment meant time lost for the American and a 30-minute penalty after being forced to fix it at the start of the following day’s stage. Nevertheless, the former supercross star regrouped and gave his best right to the end of the event. Claiming 10th on the final stage to safely bring his Husqvarna FR 450 Rally home in a commendable 10th overall, Andrew enjoyed the race and was pleased with his overall performance

Pablo Quintanilla: “I feel amazing. To spend most of 2019 in recovery and now to be here with my best ever result makes me extremely grateful. I never thought that I would be in this position at the beginning of the race. I would like to thank the team for their hard work over these two weeks – they have done an amazing job. Overall, my race has gone really well, it’s been a tough event for everybody, and the main goal was always to reach the finish. A podium at the Dakar is like a dream come true, especially after such a hard one this year. I still want that win so I’ll work hard and be back next year.”

Andrew Short: “I’m really happy to get to the end of this year’s Dakar – it’s been a long race, good fun, but very tough for me, I had a lot of challenges. The first week in the north was beautiful – I’ve never raced anywhere like it. I had some issues in those first few days that really put me on the back foot for the rest of the event. It took a lot out of me as you prepare all year for this race and to have such a big knock so early on was tough. This is only my third Dakar and I’m still learning. A two-week event like this is certainly different to a one-week world championship event and you have to be able to gauge your speed the whole way through. I definitely want to be back here next year for Dakar 2021”

Pela Renet – Rockstar Energy Husqvarna Factory Racing Rally Team Manager: “I’m really happy with second place at the Dakar – the whole two weeks have been great because of the riders and the whole team. Pablo did a fantastic job, he kept pushing and gave everything he could. Andrew finished in the top 10 after many problems, but he was able to put those early issues behind him and stay strong to the finish. It has been a tough two weeks for all of the paddock, but I’m really pleased with how the team has stuck together and how hard they have worked. All the mechanics and personnel have been amazing, and we wouldn’t have been able to achieve what we did without them.”