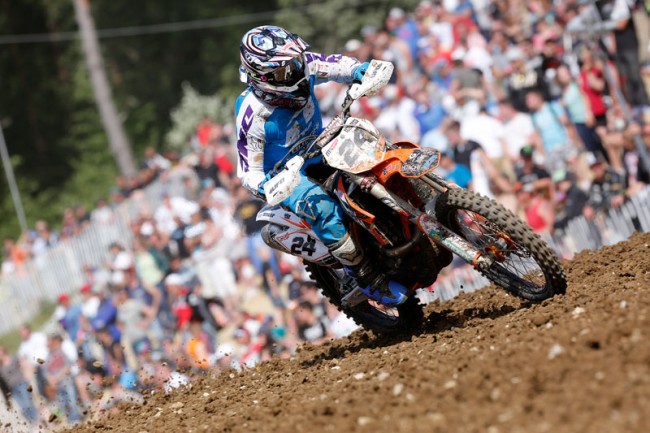 Villars sous Ecot was a packed and epic hillside setting for the Grand Prix of France today and Hitachi Construction Machinery Revo KTM’s Shaun Simpson soared to another promising overall result in the premier class – MXGP – of the FIM Motocross World Championship with ninth position. Team-mate Ben Watson took his 250SX-F to sixteenth place in the second MX2 moto. The eighth round of eighteen took place in front of full spectator enclosures with a 45,000 attendance travelling to the hard-pack and winding circuit close to the Swiss border.

The terrain was an acquired taste and most of the riding fraternity agreed that the ground lacked preparation to provide adequate line choice and valid passing opportunities. The restriction of options on the course for the racers pushed more emphasis onto the start.

Simpson set off from seventh in the gate and didn’t enjoy the best of getaways. Some shrewd moves on the opening lap of the first race drew him up to eleventh behind Max Nagl and then Ken De Dycker and he trailed the Belgian factory KTM rider for most of the moto. A determined charge on the last two laps saw the British Champion successfully move through for a well-earned seventh. The second moto start was even worse as he hugged the inside line and ran straight into a fallen David Philippaerts. Re-starting as the second-to-last racer on the track Simpson rode with guts and aplomb to track his way back to a fine eleventh place and brilliant damage limitation.

In MX2 Ben was twenty-first onto the line in MX2 and a problem in the first moto meant that he was a lap down in the formative stages and struggled to find the points. Tackling the second race with more conviction Ben rode steadily for sixteenth: his second-best classification in a rookie term that has been difficult and unpredictable.

Simpson maintains seventh position in the MXGP standings and is 78 points away from Evgeny Bobryshev in sixth. Watson added five points to forge a total of 33 thus far.

Hawkstone Park will chalk off half of the 2015 Maxxis British Championship with the fourth round of eight next weekend and will be a meeting in which Simpson hopes to extend his lead and unbeaten run in the MX1 class while Watson aims to crest the MX2 podium once more. Hitachi Construction Machinery will then drop back down through Europe to Italy for the ninth Grand Prix of year and the Maggiora circuit the following week.

Shaun Simpson:
“On the whole I didn’t enjoy this weekend. Apart from the atmosphere it has been a bit of a damp squib; from the news of the HRC guys, the paddock being so spread out, the wind, the dust and the track was too short and not technical enough until the second moto. I hate to ‘go on’! I’ve loved a couple of the GPs we’ve had this season but this was just a hard slog. I don’t think many people – apart from Febvre – liked the track. I came through quite well in that second moto and I was looking for a top ten and wanted that position and I just fell short. Overall, ninth is OK. It was hard to see people like Ferris and Coldenhoff in the top four and five; guys I have been beating week-in week-out but there are weekends that go like this and you just have to grind them out. I was being a bit hard on myself after warm-up this morning by thinking that I needed to find a few more seconds. I showed in the first race that my speed was not that bad. At the end of the day it is a strange event with lots of Frenchies that initially seem fast and you think ‘what’s going on?!’ but when it comes down to the hard push through ‘thirty minutes plus two’ then there is only one guy who is going to be there and that’s me. I’ve been solid every week and I’m happy with the set-up of the bike and how I’m feeling. I’m not making many mistakes and hopefully it will put me in a good spot.”