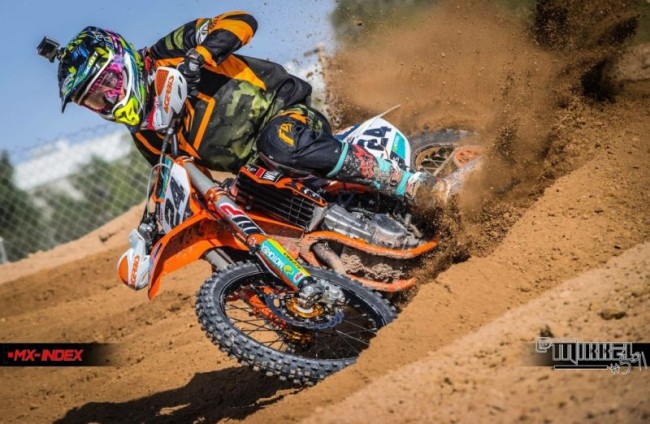 Facing a host of Grand Prix peers for the first time and after a solid winter of preparation and focus for a campaign that will involve eighteen rounds of FIM MXGP World Championship racing and eight UK national events, the 27 year old is anxious to get going with his 2016 factory-engined KTM 450SX-F. Simpson last twisted the throttle from a start gate at the 2015 Paris Lille Supercross in November and the trip into the dark Hawkstone sand will not only be his initial ‘cobweb blowout’ of the year but also an anticipated first weekend of ‘business’ for Steve Turner’s Wilvo Virus Performance KTM crew.

“I’m really looking forward to getting to work with the team and seeing how things are at races with everybody,” the winner of Belgian and Dutch Grands Prix in 2015 said. “Everything so far has been really professional and we have left no stone unturned so I doubt I should expect anything different from them at the race track.”

Simpson enters 2016 with a more rigid team structure and better support system around him. It means the winter period has been more about his personal fitness, diet and psych plan for aiming for the top three in the world this season. “How has this winter been different? So much more relaxed, so much more prepared… Ready to go and set-up feeling good. We’re ready to hit all our marks for the real deal at the end of the month…we have three weeks now to shake off the rust before Qatar and the first GP.”

An impressive entry list at Hawkstone nevertheless means that many other riders will not be taking risks or pushing limits at this opening stage of the year. Simpson finished fourth at the same event in 2015 – tied on points with Glenn Coldenhoff – and while a promising showing on home turf is desirable, a sensible approach has to be taken.

“I would like to start the season with a strong performance,” he says. “A podium result would be nice to get us underway and start some good feeling. Also reward the team for their hard work in the off-season. But I’m no idiot, it’s a long season and we are doing these internationals as ‘race training’ so I’ll not be putting my balls on the line…”

Simpson will drive to France after the weekend in preparation for the Valence and LaCapelle Marival Internationals for what will complete his trio of ‘warm-up’ appearances for Qatar.