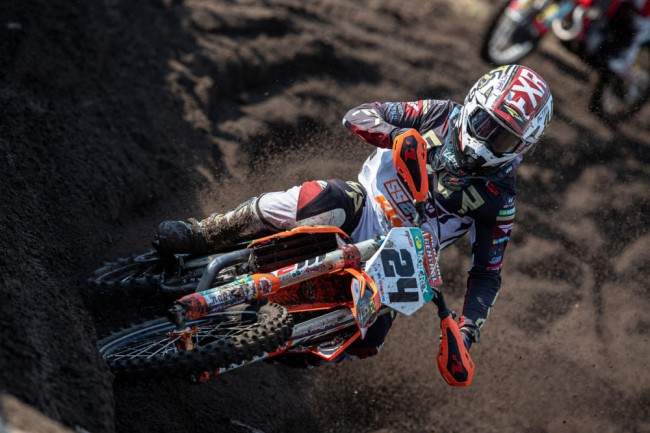 Shaun Simpson will plough straight into a full international and domestic racing season in 2021 after renewing his close link with KTM and the second term for his SS24 KTM MXGP team.

The Scot is still the only British winner of a premier class MXGP Grand Prix in the last thirteen years. He is currently rehabbing from a trio of unfortunate injuries that have kept him on the sidelines after the resumption of the FIM World Championship in the wake of the initial COVID-19 enforced lockdown in June.

While the physical problems have meant a quiet start for SS24 KTM MXGP, Simpson is thrilled that his long association and positive work with the Austrian factory will mean further support for 2021 where he aims to be one of the very few representatives from the UK at the top level of the sport. Simpson, who began GP racing in 2004, will be nearly 33-years old at the launch of the 2021 term and will be in a position to use all of his experience and knowledge to continue alternative development work with the KTM 450 SX-F and push for the top five of MXGP.

#24 was able to classify 4th in the second moto of the Grand Prix of the Netherlands at Valkenswaard in March (and had been running in the top five in the first race until a small slip saw him drop out of the points-scoring positions). 2020 was then put on hold directly afterwards as a result of the pandemic.

“2020 has been one of those weird years which has been memorable and instantly forgettable at the same time,” Simpson said from his home near Dundee while recovering from fractures to two vertebrae and a broken finger; repercussions of a training accident. “We put in a lot of effort to get the team set-up and running and the support and enthusiasm from the sponsors and everyone who backed me created this wave of optimism. Then the season stopped so fast, and I had to deal with these injuries. With the Grands Prix passing so quickly there was no time to get back on track and it was obvious we had to make a decision for 2021 and my message is this: we are all-in and we have the same goal of hitting our targets on the track. Nothing changes. I want to thank KTM for wanting to carry on this journey with me and for all the people who have already committed or expressed some interest for 2021. I know so much is still up in the air with the championships and the calendars, but we’ll be in the paddock and behind the gate wherever there is a race. I really hope we can put on a show again for the fans soon.”

“When we knew Shaun wanted to continue racing and also with the SS24 KTM MXGP team then we wanted to be a part of it. He’s a good ambassador for our brand and brings value on and off the track,” commented VP KTM Motorsports Offroad Robert Jonas.