Shaun Simpson in the wars, Ben Watson in the points at Argentinian MXGP 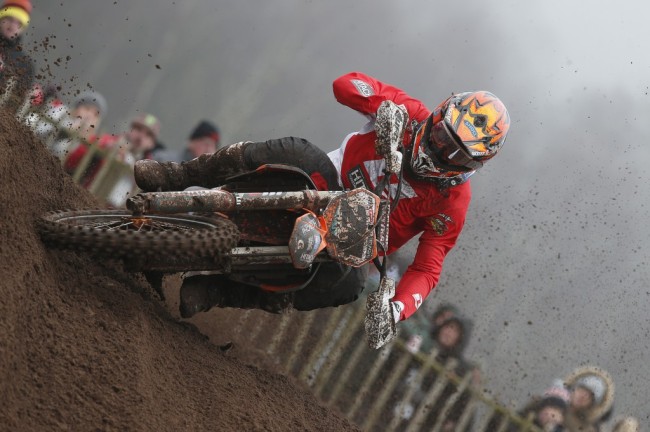 Hitachi Construction Machinery KTM emerged battle weary from the Grand Prix of Argentina and the third round of eighteen in the FIM Motocross World Championship with Ben Watson scoring his biggest haul of points in the MX2 class, Petar Petrov twelfth overall and Shaun Simpson earning his first holeshot of the season but ruing the cost of two crashes in both MXGP motos.

Villa la Angostura in Neuquen was the site of a new challenging, fast and wide racing layout. The volcanic Simpson in the wars but Watson in the points at Argentinian MXGP
soil was fine in consistency but covered a hard base and finding decent traction and avoiding the square-edged bumps seemed to be a headache for many riders. Tyre choice and refining suspension was pertinent compared to more forgiving circuits.

30,000 spectators ensured a boisterous and buzzing atmosphere with MXGP visiting this corner of South America for the first time since 1995.

British Champion Shaun Simpson made an electric start to the first MXGP moto on a cloudy, occasionally showery and cool raceday. The Scot entered the opening corner at the peak of the pack and ran in the top three for the formative stages. An exciting little spat with Ryan Villopoto took place before Simpson struggled to establish an effective rhythm and lost a few positions. A front-end crash then dumped him outside the top fifteen and he had to rally in the second part of the moto to reach fourteenth. In the second outing Shaun was again with the leaders around the first turns but a moment of contact together with Glenn Coldenhoff ripped off his rear brake hose and the 27 year old launched straight into Evgeny Bobryshev at the top of the hill causing both to crash. Simpson completed a difficult moto without the use of his brake to finish eighteenth and almost pass Dean Ferris before the flag.

Over in MX2 and Petar Petrov posted a 14-12 on the 250SX-F. The Bulgarian took whatever points he could grasp after a crash on Saturday left him in pain and sore in three places from the hard tumble. Ben Watson faced a handicap for the motos today after a technical problem on Saturday ruled him out of the Qualification Heat and he had to enter the start gate down in last position. The seventeen year old had two frantic races trying to wrestle through the pack but was content with a sixteenth and a personal best of twelfth.

After three rounds and with three flyaway events in the bag Simpson holds twelfth in the MXGP standings while Petrov carries 57 points in MX2 and Watson is fifteenth although he suffered a double DNF at Qatar for the season-opener four weeks ago.

The team now makes a quick journey back to Europe and will have only a few days to recover from the effects of the flights and the jetlag before the second round of the Maxxis British Championship. Both Simpson and Watson will be wearing the red plates as respective leaders of their series as the contest moves onto Lyng in Norfolk across Easter weekend.

Shaun Simpson:
“The whole weekend, and even back to Thailand, I felt like I had so much more to give. I don’t mean ‘in the tank’ because I’m giving everything I have out there but I feel better – and I am better – than I am performing. And it is frustrating. We haven’t changed our set-up or anything so it should be on-point. We just have to take it on the chin. The positives were the starts and the first one was a holeshot; it was great to have that black plate. The second one wasn’t bad either and I think I was third or fourth. It is good to have them dialled-in and we’ve found a few things out about the starts in the last couple of weeks. I did tense-up in the first moto and crashed pretty big on my own when I lost the front. I ended up seeing stars. It was stupid. I got a bit better by the end of the race and pipped Nathan [Watson] for another fourteenth. In the second one I was sure I could get in the top ten and despite everything that had happened in the first moto I felt pretty good. I lost my rear brake on the first lap and ended up ploughing into Bobryshev. You get tracks where you can ride without your back brake but this wasn’t one of them. I was fighting a lost cause from the beginning and it was so frustrating coming up to Butron and those guys and having to brake much earlier with the front. So, I still have so much to show and it is tough to make the long journey back with just nine points in the bag. It is not all won or lost in these flyaways though.”

Ben Watson:
“Yesterday I didn’t have much luck! I was down in the gate waiting for my bike in the qualification race and it didn’t show up. So I was last for the motos. I was miles out in the first one. It took me a while to get into the race after having missed the Heat on Saturday. I got through to sixteenth, which was my best position this year. I had a better start in the second race – around the top fifteen – and ended up twelfth; another best and some more points. Lyng is next and a pretty good track.”

Petar Petrov:
“Not the best day. Yesterday I crashed quite hard and hurt my shoulder, knee and foot: probably the most painful day I’ve had in quite a long time. Since Thailand I’ve had some injury troubles and not been able to practice the way I want. I only rode twice before I came here. Considering the situation I’m happy that everything is good now and we’ll go back to Europe and try to recover. You have to look at things positively.”