Seewer, Watson and Coldenhoff on Lommel 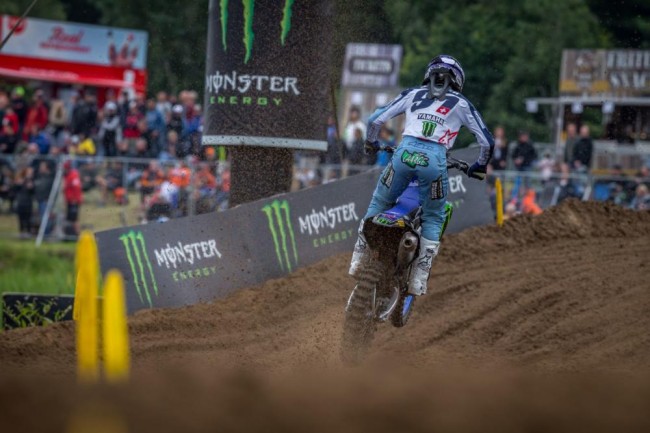 Jeremy Seewer and Ben Watson put their Monster Energy Yamaha Factory MXGP backed YZ450FMs inside the top-10 after a tough and treacherous round of Grand Prix racing in Lommel, Belgium. Seewer was seventh overall, while Watson was ninth. Glenn Coldenhoff fell 1-point short of the top-10 after an eventful day in wet and gruelling conditions. He was 11th.

The Grand Prix of Flanders in Lommel, Belgium, lived up to its reputation of being the most demanding Grand Prix of the year. As predicted, it turned into a true battle of mental and physical strength, with excessive rain being a huge factor in the overall result.

In the opening race, Seewer used his trademark ability to launch out of the gate quicker than most and emerged from turn-one in second position. The Swiss sensation was quickly relegated to fourth after a frantic first lap but continued to pressure the front-runners. As the leaders, Jeffrey Herlings and Romain Febvre broke free from the pack; the heavens opened and saturated the already rough and unforgiving sand. Seewer lost one more position to the nine-time World Champion, Antonio Cairoli, due to the rain wrecking his goggles in the latter stages of the race but dug deep to finish fifth.

Watson got off to another brilliant start and looked comfortable in seventh before the heavy down-pour of rain spoiled his chances. With a lack of vision, after running out of tear-offs, the ‘919’ had to stop in the goggle lane for a fresh set of goggles. He quickly changed and immediately returned to speed but crashed while challenging the top-10 and eventually finished 12th.

Credit must be given to Glenn Coldenhoff, who, despite the challenging conditions, was relentless on his charge from dead last to ninth after stalling the bike off the gate.

The constant downpours caused the track to deteriorate much quicker than usual, which caused chaos for the riders as they are not used to racing in such brutal conditions.

In the second and final race of the weekend, all three riders were luckless on their mission. Coldenhoff got off to an incredible start but tangled with Herlings while clearing his vision and crashed. He eventually finished 13th.

Seewer and Watson tried to bounce back from their mediocre starts, but that was a task that proved difficult with brutal conditions and heavy sand forcing too many errors. Despite the challenge, both riders pushed hard to finish eighth and ninth, respectively.

After a testing day of racing, all three riders have shifted their focus to the next Grand Prix that will take place at the likable Zelta Zirgs circuit in Kegums, Latvia. The event will serve as the seventh round of the FIM Motocross World Championship and will be the fourth of four back-to-back Grands Prix.

Jeremy Seewer: “I felt pretty good today. I managed a solid fifth in race one. The rain made me struggle a little bit because I chose to race with tear-offs and when it rains that hard, the water goes behind. So, from there, I couldn’t go close to the riders in front of me because I wouldn’t have any vision anymore. But I know I could have been third. But it didn’t happen. In the second moto, my strategy was just to be smooth and consistent every lap and let everyone else make the mistakes, but the track was so brutal that I ended up making a mistake myself. In the wet sand, it’s hard to ride because if you’re mid-pack, you just eat roost the whole time. Other than that, my speed is good, my fitness is good, and I am moving in the right direction, even if the result doesn’t show it. But there are some good tracks and better days coming, so I am looking forward to those races and putting these days behind me.”

Ben Watson: “Another day of mixed feelings for me. The time in qualifying is still a point for me, but I can’t really complain; here it doesn’t really matter. In the first race, I could keep up with the guys in front after a good start and then at one moment, it was a torrential storm and my goggles were done in one lap. I tried to ride with no tear-offs and just the goggle lens, but that was a no-go, so I had to pull into the goggle lane, and then I had quite a big crash while pushing for a top-10. It wasn’t a complete disaster, it could have been worse, but I was not amazingly satisfied. In the second race, I was consistent and solid and I finished ninth, so from here we just keep trying to build.”

Glenn Coldenhoff: “It was a really disappointing day. This morning I felt alright on the track, but in the first moto, I made a mistake myself in the start and had to come from dead last. Conditions were really tough, but no excuses. I made a mistake, and then I had a really terrible moto and finished ninth. In the second moto, I had a good start but struggled to get one tear-off off and came together with Jeffrey (Herlings), and again had to start from far back. These results are very very disappointing; I feel my riding was not good enough. I feel like we need to do more work in the sand. I can’t really explain because I had a very good week, I was more than ready for this GP. Now, back to the drawing board and we will try and regroup for next week.”