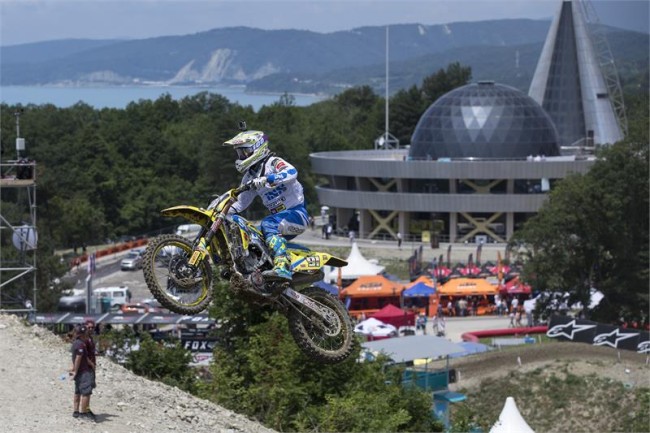 Jeremy Seewer is heading home to Switzerland, hoping to go one better than last year and take victory in front of the massive crowd of Swiss supporters at the Frauenfeld facility. Joining will be Kevin Strijbos, Arminas Jasikonis, Hunter Lawrence and returning EMX250 rider Zach Pichon. Unfortunately, Bas Vaessen is recovering from his collarbone injury that he sustained in a first turn crash at Lommel and will sit-out this round.

With Seewer heavily involved in the MX2 championship battle, a large number of supporters are expected around the Suzuki World MXGP team, as once again they become the focus of the paddock. This of course raises expectations, but as always, Seewer remains calm and focused on the job at hand. “It was an amazing event last year and I hope that the weather stays good so it can be even better this weekend. I had goosebumps when racing last time so I can’t wait to experience that again. It’s a lot of pressure of course because everyone wants me to perform well but I know what it’s going to be like this so it shouldn’t affect me. I just want to have fun and while winning on board my RM-Z250 would obviously be great, I want to go out there and have fun and try and enjoy these special moments in life that don’t happen too often. The track is cool with a good kind of dirt, some good ruts and I can’t wait to get out there in front of my home crowd.”

For Strijbos, who had his home GP last weekend, it is a chance to once again show his qualities at a track that should suit his style. “I’m looking forward to Switzerland, it’s a good track and a nice location. It has some nice jumps so hopefully the weather stays ok. I’ve checked it out and apparently it will rain quite a bit in the week so hopefully they are prepared for that this time around. Last year it got very rutted after some heavy rain on Friday. I think I will ride one time this week because Lommel is such a physically tough race, just tweak a few things and get ready for this coming weekend.”

Jasikonis will also be hoping his rib injury is better after it affected his riding last weekend in Lommel. “I will see the doctor and see what he says, and see how I feel as to what we do this week in terms of training. I’m excited for the weekend though; it’s another challenge and another chance to show everyone how much I’ve improved since last year. The Swiss track was tough for me in 2016 but I look forward to trying to put all the pieces of the puzzle together this weekend and getting back to how I know I can ride.”

MX2 rider Lawrence wasn’t able to ride the track last year, but as always is enthusiastic about the prospect of another new venue. “I like the look of the track, it looks quite cool so we’ll see how we go. I watched the event last year and it seemed to have a lot of ruts, which is something I like. The more technical and rutted the better, for me. Switzerland is a beautiful place from what Jeremy says about the country so I’m looking forward to checking it out and having a good weekend. There will be a lot of supporters for Jeremy and also for Suzuki so it should be a good weekend.”

Joining up with the team will be Zach Pichon, who missed the last two EMX250 rounds with a shoulder injury sustained in Russia. “I’m happy to be riding again with the team in Switzerland. I really like the track, after riding it last year in the EMX125 series and I hope that I can put in a good performance. I have done two races since Russia, a German and a French race and my feeling on the bike is quite good. The shoulder is pretty much 100% again and I can’t wait to get back out there in the EMX250 class under the Suzuki World awning.”

With the interest in Seewer, Switzerland will feel like another home GP for the Suzuki World MXGP team and all the riders competing are hoping to do their best in front of what will hopefully be another bumper crowd.